All Aboard! Peace Boat’s Australian tour

Peace Boat’s 103rd Voyage spent nearly three weeks crossing Australia’s waters, from Fremantle in the west to the final port of Brisbane, departing on January 28, 2020. During this period Peace Boat collaborated with the International Campaign to Abolish Nuclear Weapons (ICAN) to host a series of five workshops in cities spanning the Australian coast: Fremantle, Adelaide, Melbourne, Sydney and Hobart.

From local activists and teachers to union members and government officials, workshop attendees boarded the ship to learn about Peace Boat and ICAN’s fight to ban nuclear weapons, to hear testimony from those impacted by nuclear testing and uranium mining, and to discuss how to together advance the goals of ICAN’s campaign.

Dave Sweeney, co-founder of ICAN, describes the movement as an idea that came about between “a few people having coffee” in Melbourne in 2005. Disappointed by the failure of the Nuclear Non-proliferation Treaty (NPT) to pressure nuclear weapon states to reduce or eliminate their own nuclear weapons, Dave and his colleagues were motivated to create a new treaty that would ban the weapons for good. That idea has since grown into a global coalition of over 550 member organizations, including Peace Boat, which is also one of ten international steering committee members.

ICAN was instrumental in creating the Treaty on the Prohibition of Nuclear Weapons (TPNW), which was adopted at the UN in July 2017 and has since been signed by eighty and ratified by thirty-five countries. Fifteen more are needed for the treaty to enter into force and become international law. For this achievement and its continuing work to end nuclear weapons, ICAN was awarded the Nobel Peace Prize at the end of 2017.

Dave Sweeney, who also works as Australian Conservation Foundation’s national nuclear-free campaigner, faces a challenge in his home country of Australia, which has not yet signed the treaty despite 79% public support for it and similarly to Japan, continues to support nuclear deterrence in its foreign policy.

As Dave addressed his fellow Australians during onboard workshops, he urged them to call for their local governments to sign on to ICAN’s Cities Appeal, a global call from cities and towns in support of the TPNW. Twenty-six cities throughout Australia have signed so far, including the cities of Fremantle, Hobart, Sydney and Melbourne, all visited during the 103rd Voyage. In conclusion, Dave said that this is a choice all of Australia will have to make. “This treaty will become international law,” he told attendees. “Are we a country that abides by international law, or are we a rogue state with weapons of mass destruction?” 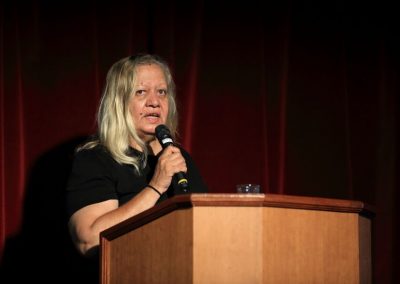 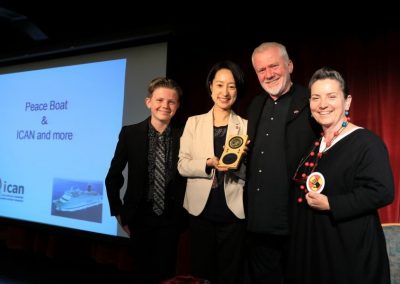 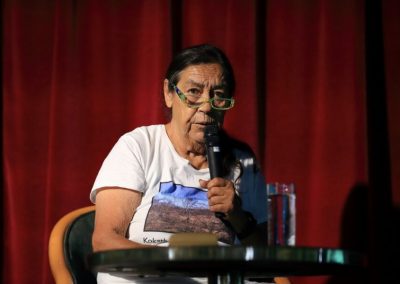 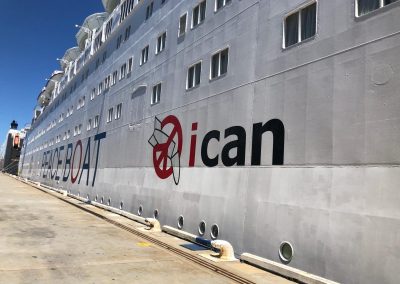 International support for the TPNW is growing. When the Pope visited Hiroshima and Nagasaki last year, he called the continued existence of nuclear weapons “an affront to heaven.” The Red Cross has determined that despite being the largest provider of humanitarian aid in the world, it does not have the capacity to respond to a nuclear attack, and is formally campaigning for the TPNW. Red Cross members attended each of the five ICAN workshops around Australia, and reaffirmed their official judgment on nuclear weapons: “That which we cannot respond to, we must prevent.”

The workshops were also joined by two members of Aboriginal communities driven out of their ancestral homes by nuclear testing. They have spent their lives working to end nuclear weapons and to protect Aboriginal land and people from uranium mining, an ongoing challenge in Australia.

Debbie Carmody, an Anangu and Spinifex woman from Kalgoorlie in Western Australia, shared her testimony of the British nuclear tests conducted in Maralinga and Emu Field in the 1950s. The tests were conducted despite the government knowing there were people in the surrounding area, and many died from the resulting radioactive fallout. “There were thousands of people lying like dead ants,” she says, recalling her family’s stories. Radiation had contaminated the air, food and water, and by 1952 surviving Spinifex people were refugees. They would not be able to return to country —the term First Nations people in Australia use for their homeland— until the 1980s.

Kokatha woman Auntie Sue Coleman-Haseldine of South Australia was two years old when the first tests started. Her family tells stories about a black mist that came after the bombs. These mists were dust storms that had picked up radioactive fallout, spreading radiation far from the test sites. The damage caused by these tests has continued to impact subsequent generations, Auntie Sue says, and Ceduna is today known as the “Cancer Capital” of Australia.

Studies show that fallout from the tests reached nearly every corner of Australia, and the same would happen again in the event of a nuclear strike. Auntie Sue urged the audience to share this story, and to remember Australia’s past in order to protect its future. “I’ve lived my life, and its been under the threat of a nuclear bomb the whole time,” she said. “I’d like my grandchildren to live life without the threat of the bomb.

At the end of each workshop, participants gathered in groups to discuss their backgrounds, what they could do to further ICAN’s work, and how to approach members of different levels of government. Seasoned activists encouraged others not to be afraid, to start small with phone calls to representatives, or letters to local media. If you’re nervous about approaching a government official, try bringing a friend, someone suggested. Don’t know something? Schedule a follow-up meeting.

Contacting schools and unions, attending local actions by groups such as the Independent and Peaceful Australia Network, or promoting ICAN at government conventions were other recommendations. Many working groups emphasized the importance of involving youth, linking nuclear and environmental issues, and teaching people points and counterarguments they can use when trying to persuade others. The impact of art and creativity was also highlighted, by the exhibition of a series of photographs of nuclear survivors from Japan’s Kochi (largerly fishermen impacted by nuclear testing in the Pacific), Hiroshima, Nagasaki and Bikini by Japanese peace educator Okamoto Keisuke, who also joined the voyage.

As stated by Robert Tickner, ICAN Australia Ambassador and former Federal Member of Parliament, while closing the Sydney workshop, “This meeting is transformative. This can be a model for how we can grow the movement.”

Report by Sarah Lord Anderson, with photos by Kataoka Kazushi and others. Originally published by Peace Boat. 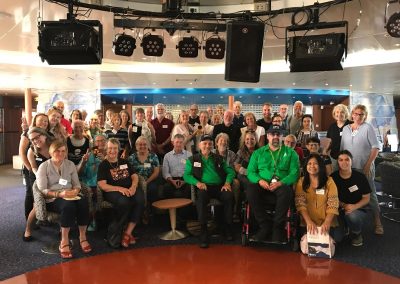 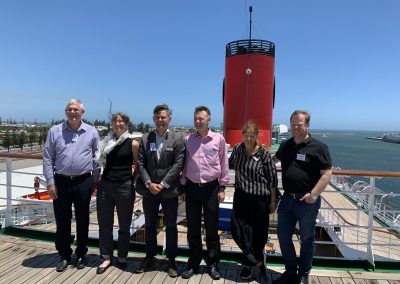 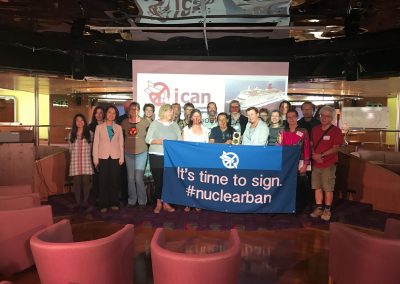 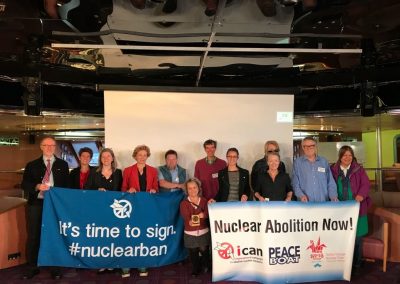 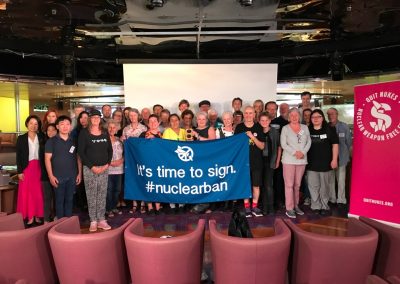 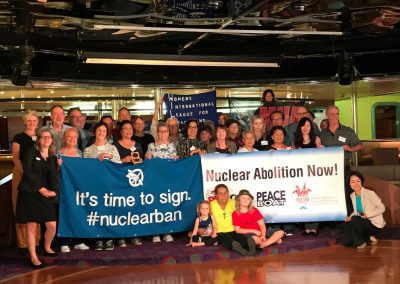 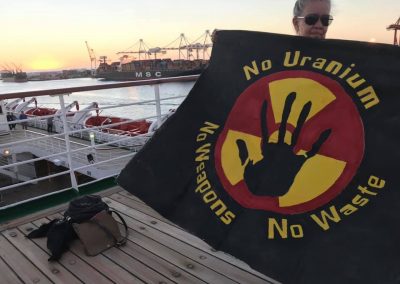 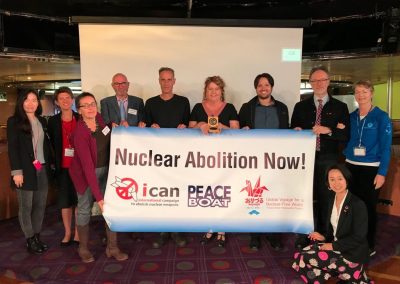