More than 50 faith-based organisations have called for the Australian Government to support and participate in next week’s UN talks on a treaty to ban nuclear weapons.

On Monday 27th March, a majority of nations will gather at the UN in New York for the first of two sessions convened to fill the long-standing legal gap by making nuclear weapons illegal – similar to other weapons of mass destruction including biological and chemical weapons.

Sadly, the Australian government has decided to boycott the negotiations, presumably in response to pressure from the Trump administration, which is hostile to the initiative.

Australia’s inaction is not consistent with obligations under the nuclear Non-Proliferation Treaty, which requires all parties to pursue negotiations in good faith on effective measures relating to nuclear disarmament.

The Interfaith Appeal calls for the prohibition and elimination of nuclear weapons as a “moral imperative”.  Signatories to the Appeal include the National Council of Churches in Australia, the Hindu Council of Australia, Muslims Australia, Caritas Australia and the Australian Jewish Democratic Society.

‘There is widespread concern among faith groups for a breakthrough in disarmament negotiations. It is essential that the Australian government be actively involved in the forthcoming UN meetings.’ said David Purnell of Quakers Australia, and a member of the delegation delivering the Interfaith Appeal to parliamentarians on Thursday.

‘The government is out of step with 74% of the public who want Australia to support these historic negotiations, according to a new opinion poll*,’ said Richard Tanter, Chair of ICAN Australia. ‘Rather than taking orders from the Trump administration, Australia should reverse its decision to boycott the most important multilateral nuclear disarmament negotiations for decades.’

‘Australia is turnings its back on the nuclear Non-Proliferation Treaty and the UN in general. This is reckless behaviour in a time of increasing global insecurity. We must join the global majority and pursue a strong and effective treaty for the prohibition and elimination of nuclear weapons’. 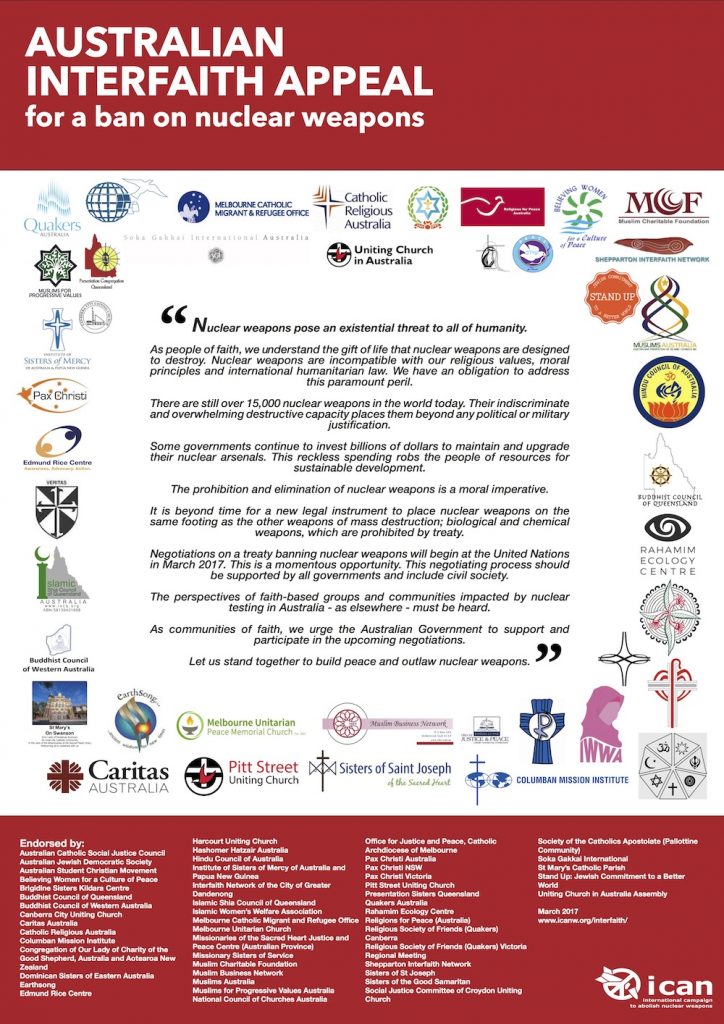