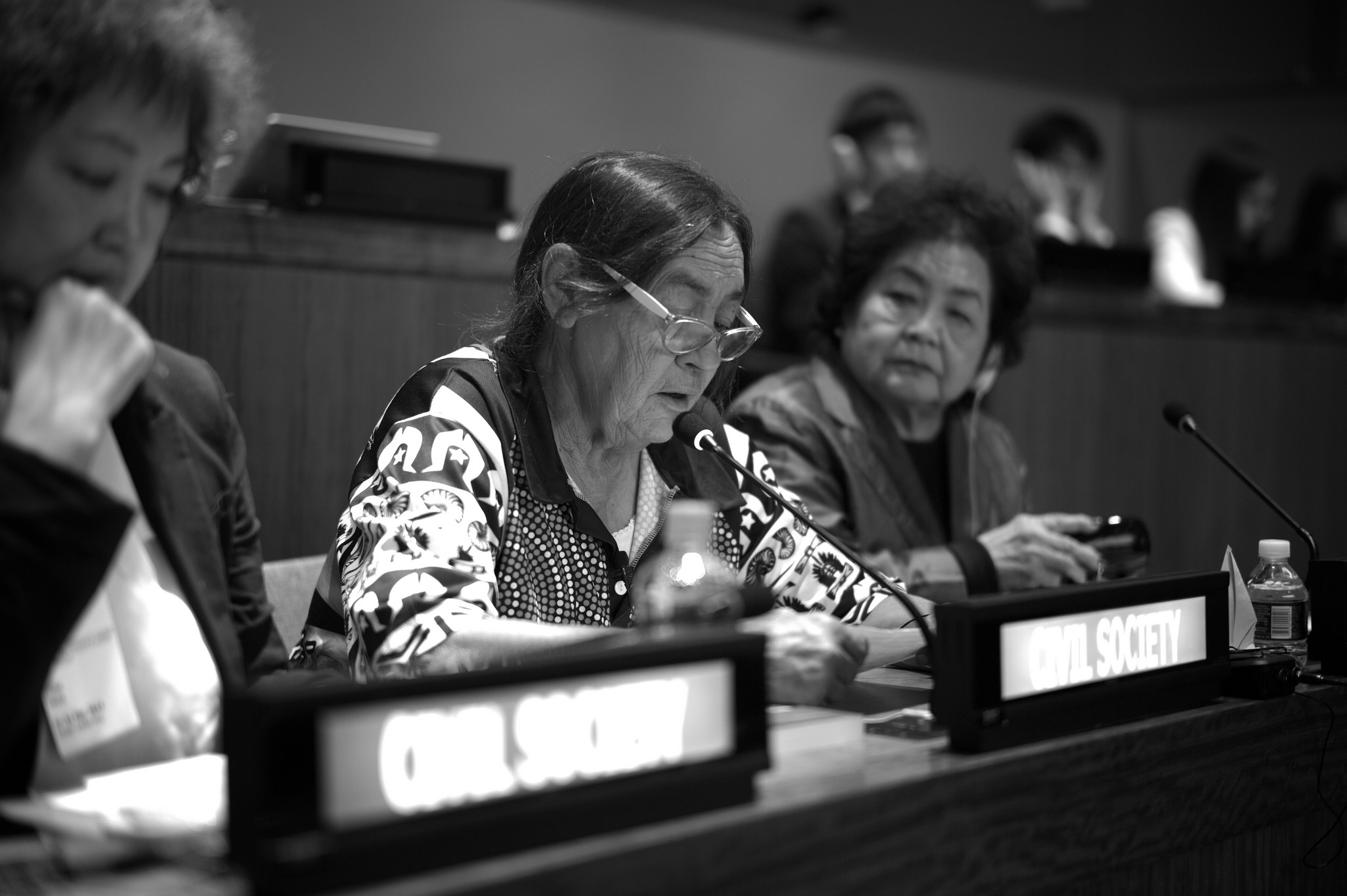 The Australian Government did not participate in the first week of the negotiating conference, choosing instead to stand with the United States and protest against a nuclear ban treaty outside the conference on the opening day. The Australian mission to the United Nations refused Sue’s request to meet.

Speaking about the treaty under negotiation, Sue said; “Together, we need to connect the past, present and future, and work towards a treaty to ban all nuclear weapons, so there will be no new victims under a mushroom cloud.

“A nuclear ban treaty is also an opportunity to assist countries to make amends to victims of nuclear weapons. The treaty should acknowledge the permanent damage done to people and culture across generations, and particularly for Indigenous people worldwide. It should require countries to address the needs of impacted people.”

Sue was a small child when the UK Government conducted nuclear tests in South Australia, displacing her and many other families from their homelands. She delivered a personal testimony at the 2014 Vienna Conference on the Humanitarian Impacts of Nuclear Weapons; which helped crystallise the urgent need for a new legal instrument to outlaw nuclear weapons.

In Vienna and again at the United Nations, Sue spoke alongside Hiroshima survivor Setsuko Thurlow, who recounted her survival of nuclear war and urged the conference to negotiate a strong treaty; “we have no doubt that this treaty can – and will – change the world.”

The Australian Government continues to support a role for nuclear weapons in its defence policy, despite popular support for a ban treaty from 74% of the Australian public.

At the close of the week, ICAN Executive Director Beatrice Fihn summed up; “We made exciting progress this week in our campaign to close the gap in international law and ban nuclear weapons. No one was distracted by the opposition. We look forward to closely reviewing the draft text.

“Nuclear weapons are intended to kill civilians by the millions. Civilized people no longer believe that is acceptable behavior. It is time to place nuclear weapons alongside chemical and biological weapons, as relics we have evolved beyond. Banning these weapons in international law is a logical first step to eliminating them altogether.”

Negotiations on a treaty for the prohibition and elimination of nuclear weapons will continue from 15 June – 7 July.

Transcript of speech by Sue Coleman Haseldine on 28 March, 2017:

My name is Sue Coleman-Haseldine. I was born in 1951 on Koonibba Mission. I was a small child when the British and Australian Government tested nuclear weapons in the South Australian desert near my birthplace.

For over a decade, full nuclear explosions and hundreds of experiments dispersed plutonium and other weapons materials contaminating almost all of Australia.

Aboriginal people were still living close to the test sites and were told nothing about radiation. Some communities were so contaminated that most people developed acute radiation sickness. High rates of cancer were eventually documented in the 16,000 test workers but no studies were done on Aboriginal people and others living in areas of fallout, many of whom were even more highly exposed.

High rates of cancer and chronic illness haunt my family and our wider community. My small town of Ceduna is being called the ‘cancer capital’ of Australia.

I worry about animals and plants which are also harmed by radiation. They can’t speak for themselves and are ignored and left to die.

Today, the Australian and South Australian governments are again proposing new nuclear waste dumps for South Australia as if having being poisoned once, it’s somehow okay for us and our lands to be radioactively sacrificed again.

The language and rationale being used today is very similar to that of the 1950s. Desolate, and unused land being used in the national interest. We won’t accept this – not for us, not for the broader community. We know from bitter experience that nuclear materials and weapons can never be safe.

Aboriginals are the oldest living culture on the planet and have cared for these lands continuously despite attempts to annihilate, assimilate and suppress us, we remain committed to looking after our people, cultural knowledge, lands and waters.

Though we live in remote Australia, we know that everywhere they have been used worldwide, nuclear weapons have devastated people and their lands. Together, we need to connect the past, present and future, and work towards a treaty to ban all nuclear weapons, so there will be no new victims under a mushroom cloud.

A nuclear ban treaty is also an opportunity to assist countries to make amends to victims of nuclear weapons. The treaty should acknowledge the permanent damage done to people and culture across generations, and particularly for Indigenous people worldwide. It should require countries to address the needs of impacted people.

I’m speaking to you today in the hope that by working together, life on Earth can continue to be a safe, nuclear free future. A nuclear weapons ban treaty is a crucial step on the path to that future becoming a reality, as it must.

I know that the future is not ours, it will forever belong to the next generation. Thank you for listening to me.