Get involved in direct advocacy to help end nuclear weapons!

Three out of four people want the Australian Government to sign and ratify the UN Treaty on the Prohibition of Nuclear Weapons, but it hasn’t happened yet.

The government’s position does not reflect the will of the people, and they are trying to get away with it. We won’t let them!

That’s why we’re calling out for people like you to join us as Nuclear Weapon Ban Advocates!

Our Advocates are ordinary people with a diverse range of perspectives and experience. They reach out to their local council, state/territory parliamentarians, or federal parliamentarians.

As an Advocate and local constituent, you will get to know the views and position of your representatives as you urge them to work for Australia’s ratification of the nuclear weapon ban treaty. You will be involved in direct advocacy to help end nuclear weapons.

Fill out the form here and we will team you up with others in your area as well as provide background and materials on the most strategic approach to meet with your local representatives so you can build long-term, meaningful, advocacy relationships with them. Thank you to all of those who have already written letters and met with MPs in the last few months, we know it’s making an impact. 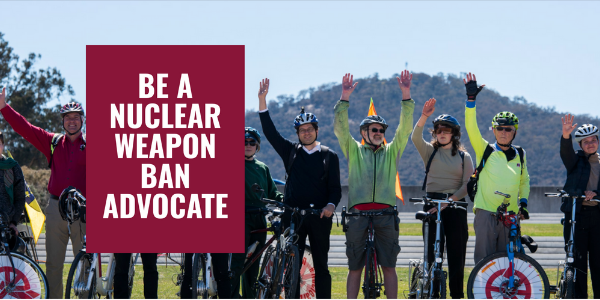 In 2017 Australia boycotted the international negotiations to adopt the UN Treaty on the Prohibition of Nuclear Weapons. In 2022, many of those nations present will meet again for the first time since the Treaty became permanent international law. This time, we want Australia to be there.

Though we have not yet joined the treaty, the First Meeting of States Parties in March 2022 is an opportunity for all nations to attend as ‘observers’, and provides an opportunity to meaningfully engage with the most significant development on nuclear disarmament of our time. Sweden, Finland, Switzerland and Norway have already announced they will attend as observers. Significantly, Norway is the first “nuclear-endorsing” state to take this step.

Join us as a Nuclear Weapon Ban Advocate, and call on your local representative to make sure Australia is in the room at this landmark international meeting.

Nuclear weapons are inhumane, illegitimate and illegal. It’s time for the Morrison Government to stop legitimising these worst of all weapons of mass destruction and join the ban.