Cities and towns can support Australia signing and ratifying the nuclear weapon ban treaty by passing a motion at a council meeting.

Ask for you council's support today!

Resources to support your community campaign

The ICAN Cities Appeal is a global call from cities and towns in support of the UN Treaty on the Prohibition of Nuclear Weapons. All national governments are now invited to sign and ratify this crucial global agreement, which prohibits the use, production and stockpiling of nuclear weapons and lays the foundations for their total elimination.

Australia has not yet joined the Treaty on the Prohibition of Nuclear Weapons but cities and towns can help change this in the near future.

Mayors and councillors want to hear from local people about the issues that are important to them.  If nuclear disarmament is important to you, then this section has everything you need to communcate with and lobby your local representatives.

Below you will find a number or resources to help you advocate for your city or town to endorse the ICAN Cities Appeal and join the growing number of Australian councils who have supported the campaign.

The time for action is now. Help us build support for the Treaty in cities and towns across Australia.

Start by watching this short slideshow, which gives a brief overview of the Cities Appeal and actions you can take!

Our city/town is deeply concerned about the grave threat that nuclear weapons pose to communities throughout the world. We firmly believe that our residents have the right to live in a world free from this threat. Any use of nuclear weapons, whether deliberate or accidental, would have catastrophic, far-reaching and long-lasting consequences for people and the environment.

Therefore, we warmly welcome the adoption of the Treaty on the Prohibition of Nuclear Weapons by the United Nations in 2017, and we call on our national government to sign and ratify it without delay.

a) Endorses the International Campaign to Abolish Nuclear Weapons Cities Appeal, which reads: “Our city/town is deeply concerned about the grave threat that nuclear weapons pose to communities throughout the world. We firmly believe that our residents have the right to live in a world free from this threat. Any use of nuclear weapons, whether deliberate or accidental, would have catastrophic, far‐reaching and long‐lasting consequences for people and the environment.”

b) We warmly welcome the adoption of the Treaty on the Prohibition of Nuclear Weapons by the United Nations in 2017, and we call on our national government to sign and ratify it without delay.

Below is a some draft text you can send to your local council when asking them to endorse the ICAN Cities Appeal. We recommend personalising it and including why this issue is important to you, and why you have been inspired to get involved.

I am writing to urge you to endorse the Cities Appeal, a project of the Nobel Peace Prize-winning International Campaign to Abolish Nuclear Weapons (ICAN).

Driven by grave concern for the devastating humanitarian impacts of any use of nuclear weapons, two-thirds of all nations negotiated the nuclear weapon ban treaty in Jul 2017. It is the first treaty to comprehensively outlaw nuclear weapons, setting out a pathway for their total elimination.

On October 24th 2020, the Treaty on the Prohibition of Nuclear Weapons received its 50th ratification, triggering its entry into force 90 days later. Now, nuclear weapons have been banned under international law on January 22, 2021.

Australia has not yet signed on to the Treaty on the Prohibition of Nuclear Weapons.

The Cities Appeal provides the opportunity for cities and councils to support Australia signing and ratifying the nuclear weapon ban treaty and call on our leaders in federal parliament to pave the way for nuclear disarmament and join the Treaty without delay.

In Australia, more than 40 councils have endorsed including Melbourne, Sydney, Hobart and Fremantle. International endorsers of the Cities Appeal include Geneva, Washington DC, Manchester, Hiroshima Los Angeles and Paris and LA.

More than 75 years on from the atomic destruction of Hiroshima and Nagasaki, we are still living under the shadow of the bomb. Almost 14,000 nuclear weapons remain in our world, held by nine nations.

The Australian Red Cross, Australian Medical Association, the Australian Council of Trade Unions and dozens of civil society organisations have called on Australia to join the Treaty, supported by 79% of the public (Ipsos, November 2018). More than 250 state and federal parliamentarians from across the political spectrum have pledged to work for Australia to sign and ratify the Treaty.

I hope that council will consider endorsing the following text of the Cities Appeal at an upcoming council meeting:

“Our city/town is deeply concerned about the grave threat that nuclear weapons pose to communities throughout the world. We firmly believe that our residents have the right to live in a world free from this threat. Any use of nuclear weapons, whether deliberate or accidental, would have catastrophic, far-reaching and long-lasting consequences for people and the environment.

Therefore, we warmly welcome the adoption of the Treaty on the Prohibition of Nuclear Weapons by the United Nations in 2017, and we call on our national government to sign and ratify it without delay.” (www.icanw.org.au/cities)

I hope you will take this small but significant step to ensure Australia gets on the right side of history. Please confirm your endorsement by emailing jemila@icanw.org.

You can also ask others in your communtiy to take action by using our digital action tool!

You can use the text below to start a petition in your local community to support a council motion endorsing the Cities Appeal.

We request that Council endorse the ICAN Cities Appeal urging the Australian Government to sign and ratify the Treaty.

We further request that Council communicate its endorsement to the Prime Minister, Foreign and Defence Ministers, the Leader of the Opposition, shadow foreign and defence ministers, and leaders of all political parties represented in the Australian Parliament.

We finally suggest that council take steps to ensure that council funds are not invested in companies that produce nuclear weapons.

Similar to a petition, a collection of postcards addressed to your local coucnillors, signed by members of your local community, can send a strong messsage of grassroots support. 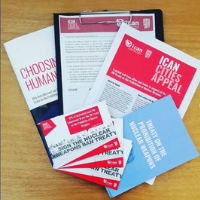 In instance of a nuclear war, the local mayor will be amongst first leaders expected to coordinate local responses and guide the community.

The list below, compiled by Mayors for Peace Fremantle, outlines just some of the corrdination efforts that would fall within council responsiblity following the immediate impacts of a nuclear detonation.

COVID-19 and lobbying your local council

The COVID-19 public health crisis is rapidy changing the way societies respond and adpat in emergency situations to protect communities and save lives. We are also seeing fist hand the pressure on frontline and healthcare workers in responding to global humanitarian crises.

The strain on health facilities and professionals to respond to a nuclear war would last generations. Doctors from the International Physicians for the Prevention of Nuclear War (IPPNW), winner of the 1985 Nobel Peace Prize and founding organisation of ICAN, explain why they work to rid the world of nuclear weapons – in the midst of a global pandemic.

You can read thier statement here.

The pandemic also poses significant changes to traditional ways of organising, lobbying and campaigning.   Here are our tips on how to communicate with local government during this time staying while safe, active and connected.

1. Contacting councillors
Many council employees and councillors may still be working from home. This may mean their post service is interrupted. Where possible email your Mayor and local councillors directly, with a formal letter as an attachment. Follow up with a phone call to their mobile number. These details should be available for each councillor on your council website.

2. Request an online meeting
Practice physical distancing and request to meet with your local councillor via Zoom, Skype or another online meeting application.

3. Offer an online briefing
You can also offer to brief councillors as a group, or speak to a motion at a council meeting using Zoom, Skype or another online meeting application. 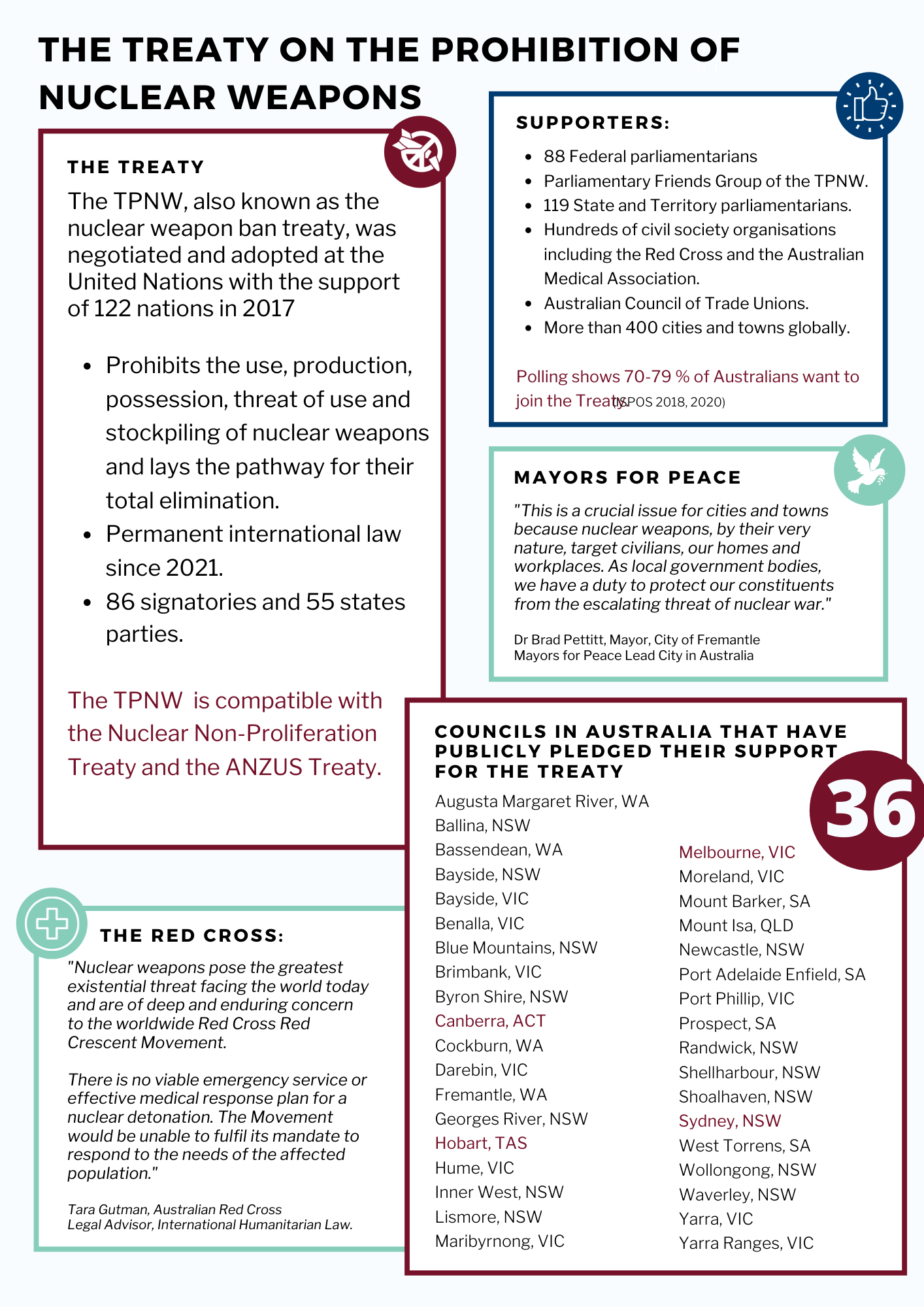 What is the U.N. Treaty on the Prohibition of Nuclear Weapons?

The TPNW, also known as the nuclear weapon ban treaty, was negotiated and adopted at the United Nations with the support of 122 nations in 2017. It is the first instrument of international law to clearly outlaw the development, possession, hosting, transfer, use and threat of use of nuclear weapons. The ban treaty is a crucial element in efforts to stigmatise and eliminate nuclear weapons. It will enter into force when 50 nations have ratified, which is expected within the next two years. The TPNW follows the path that is proving effective for biological and chemical weapons, landmines and cluster munitions. A treaty prohibiting and providing for the elimination of these weapons has been crucial, indeed no other approach has worked. Please check the front page of our website for the up-to-date number of signatories and states parties to the TPNW. While nuclear-armed states are yet to join the treaty, their support was not expected straight away. Like the treaties prohibiting other abhorrent weapons, the TPNW will work over time to strengthen the stigma against nuclear weapons, de-legitimising nuclear deterrence and the very possession of the weapon.

Australia has joined the treaties prohibiting chemical and biological weapons, landmines and cluster munitions. Australia has already agreed to most of the provisions within the TPNW by joining the nuclear NonProliferation Treaty and the South Pacific Nuclear Weapon Free Zone, and has long claimed to support nuclear disarmament. The Australian public supports action on nuclear disarmament. Recent polling indicates 79% of the public want Australia to join the TPNW, with only 8% opposed (Ipsos, November 2018). Current Australian defence policy supports the threat and potential use of nuclear weapons by the United States on Australia’s behalf. Australia can end this policy while maintaining a strong military alliance with the US, as other nations have done. The supposed benefits of nuclear deterrence are ultimately unproven, yet nuclear weapons work to undermine international security and diplomacy. The ban treaty provides the best pathway forward to strengthen the norm against nuclear weapons and pursue their total elimination.

Why should councils in both urban and rural areas be involved?

Cities and towns are champions in challenging the world’s most urgent existential issues. As cities worldwide are nuclear targets, councils have a special responsibility to their constituents to speak out against these instruments of humanitarian harm. The support of cities and towns worldwide will contribute directly to the success of the TPNW. The effects of nuclear weapons do not stop at the city limits, and neither should positive efforts for change. With your participation, we can ensure that Australia gets on the right side of history by signing and ratifying the nuclear weapon ban treaty.

How do we endorse the Cities Appeal?

After the Council or Mayor has decided to endorse the Cities Appeal via a decision or motion, please email jemila@icanw.org. Councils that have already endorsed, and suggested further actions are listed at: www.icanw.org.au/cities.

Does the Australian Local Government Association have a position on the TPNW?

At it’s June 2021 National General Assembly in Canberra the Australian Local Government Association unanimously passed a motion calling on Australia to sign and ratify the Treaty on the Prohibition of Nuclear Weapons.

The motion was moved by Darebin City Council (VIC) and seconded by the City of Ryde (NSW).

As the motion passed the conference erupted in applause, you can read our full statement here.