The ICAN Cities Appeal was endorsed unanimously by the City of Newcastle on 26 February, 2019.

“City of Newcastle is deeply concerned about the grave threat that nuclear weapons post to communities throughout the world. We firmly believe that our residents have the right to live in a world free from this threat. Any use of nuclear weapons, where deliberate or accidental, would have catastrophic, far-reaching and long-lasting consequences for our people and the environment. Therefore, we warmly welcome the adoption of the Treaty on the Prohibition of Nuclear Weapons by the United Nations in 2017, and we call on our national government to sign and ratify it without delay.” 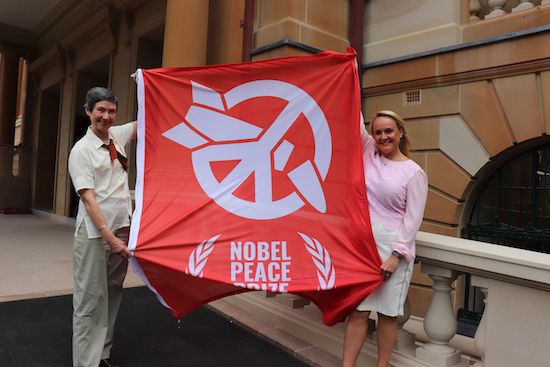 2020: The City of Newcastle submitted a motion in support of the Treaty on the Prohibition of Nuclear Weapons to the Australian Local Government Association (ALGA)  for discussion at the 2020 National General Assembly.

2021: The City of Newcastle reaffirmed its long-held commitment to declaring the city a Nuclear Free Zone. It followed a Lord Mayoral Minute supported by City of Newcastle councillors in June, acknowledging the City’s long standing history with local, national and international peace movements, dating back to 29 June 1982 when the City first declared Newcastle a Nuclear Free Zone under Lord Mayor Joy Cummings AM, and resolving to establish with Hunter Peace Group a dedicated Newcastle Peace Park at Tighes Hill Reserve, adjacent to Islington Park.

Lord Mayor Nuatali Nelmes said the City of Newcastle was proud to support these efforts as a progressive city.

“The City of Newcastle has a long and proud history of activism against nuclear weapons, particularly as a city with a large working port. Former Newcastle Lord Mayor Joy Cummings was a passionate advocate for the peace movement, inspiring strong community support and joining with Hunter Peace Group, trade unionists and activists to hold demonstrations on the importance of nuclear disarmament and protecting Newcastle as a Nuclear Free City and port. I am honoured to uphold that mission today on behalf of the City, in which there is no place for nuclear weapons in modern society.”

Image: ICAN Australia  flag is flown alongside the Hunter Peace Group flag in the City of Newcastle to mark the 76th anniversaries of the bombings of Hiroshima and Nagasaki.