The ICAN Cities Appeal was endorsed by the City of Prospect on 19 January 2021.

(1) Acknowledge the correspondence from Mr Steve Georganas MP, Federal Member for Adelaide, seeking Council support on this matter in advance of the formal enforcement of the Treaty to occur on 22 January 2021.

(2) Acknowledge it has a role and responsibility to protect its community and the wider public from the threat posed by nuclear weapons.

(3) Express its concern for the detrimental consequences at a global level resulting from, inter alia, the production, transport and storage of nuclear weapons; posing an unacceptable threat internationally.

(5) Write to the International Campaign to Abolish Nuclear Weapons (ICAN), the Australian Prime Minister, the Federal Defence and Foreign Ministers, Portfolio Shadow Ministers, all other Federal Members of Parliament (House of Representatives) and the Premier of South Australia, who also holds the portfolio of Minister of Defence, Space Industry for SA and the SA Branch of the Independent and Peaceful Australia Network providing a copy of this motion and its call for the Commonwealth Government to sign and ratify the Treaty without delay

2021: Mayor David O’Loughlin attended a special Councillors Roundtable hosted by ICAN Australia to celebreate the entry into force of the Treaty on the Prohibition of Nuclear Weaposns in March 2021. 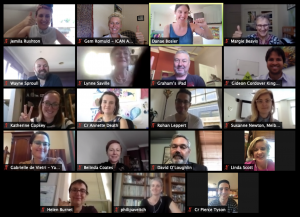