To the Prime Minister and Parliament of Australia

On 19 June 2022, members of the Yankunytjatjara, Kokotha, Adnyamathanha, Dieri, and Kuyani peoples and civil society came together in Port Augusta, South Australia.

We spoke together across generations, sharing stories of the impacts of nuclear weapons testing on South Australia in the 1950s and 1960s by the British Government. These tests were supported by the Australian Government. In all, there were a dozen atmospheric nuclear weapons tests between 1952- 1957 held in the Monte Bello Islands, Emu Field and Maralinga.

In addition, highly contaminating ‘minor trials’ ran from 1953 – 1963. These nuclear events are felt by many to be an act of war against Aboriginal people. They left a legacy of harm and intergenerational suffering, including through dislocation, contamination, silence and lack of continuity of care for both people and the environment.

There are many stories. People have been affected by these bomb tests far and wide. Far from being a historical event, we are clear that the tests themselves were not the only damage. The waste left behind and the on-going complications and fears from fallout and contamination, and the mental scares, are still strongly felt in Aboriginal communities across the regions where testing took place.

Elders recalled their own experience and the experience of their family members who were alive at the time of the testing. Many recalled sicknesses including cancers, skin conditions, burns, autoimmune conditions, reproductive and birth anomalies, and other illnesses within our families. We discussed the long-lasting concerns of contamination on the plants and animals, the impact on our bush tucker and on the health of Anangu and all peoples around Australia. We are concerned for the next generations who will continue to be burdened by the legacies of nuclear testing.

Young people are speaking up to keep these stories alive. They call for better education, research, remediation and monitoring. They asked for practical help with better services to assist affected community members with medical aid, and for recognition and apology for the harms suffered. They invite opportunities to connect with other impacted communities in the Pacific region and around the world, including with hibakusha, the atomic bomb survivors from Japan.

The legacy of nuclear testing and the burden of radioactive waste are human rights issues. Aboriginal people hold great knowledge on the need to care for country, and take this responsibility seriously as our cultural obligation to country and our people and for the next generations.

We also understand how culturally important it is to fight for country. We call on Government to respect cultural heritage and belief systems, and work with affected communities, listen to lived experience and try to genuinely understand and address the on-going harms of nuclear weapons testing and related industries.

We send a call to the Australian Parliament – those of us with lived experience of nuclear harms in Australia expect our government to invite us to the table to work on the solutions and to sign and ratify the Treaty on the Prohibition of Nuclear Weapons.

Lastly, a message to the nuclear weapon states who possess and threaten use of nuclear weapons; Our stories and hopes are stronger than your weapons and fears.

We send a call to the Australian Parliament – those of us with lived experience of nuclear harms in Australia expect our government to invite us to the table to work on the solutions and to sign and ratify the Treaty on the Prohibition of Nuclear Weapons. 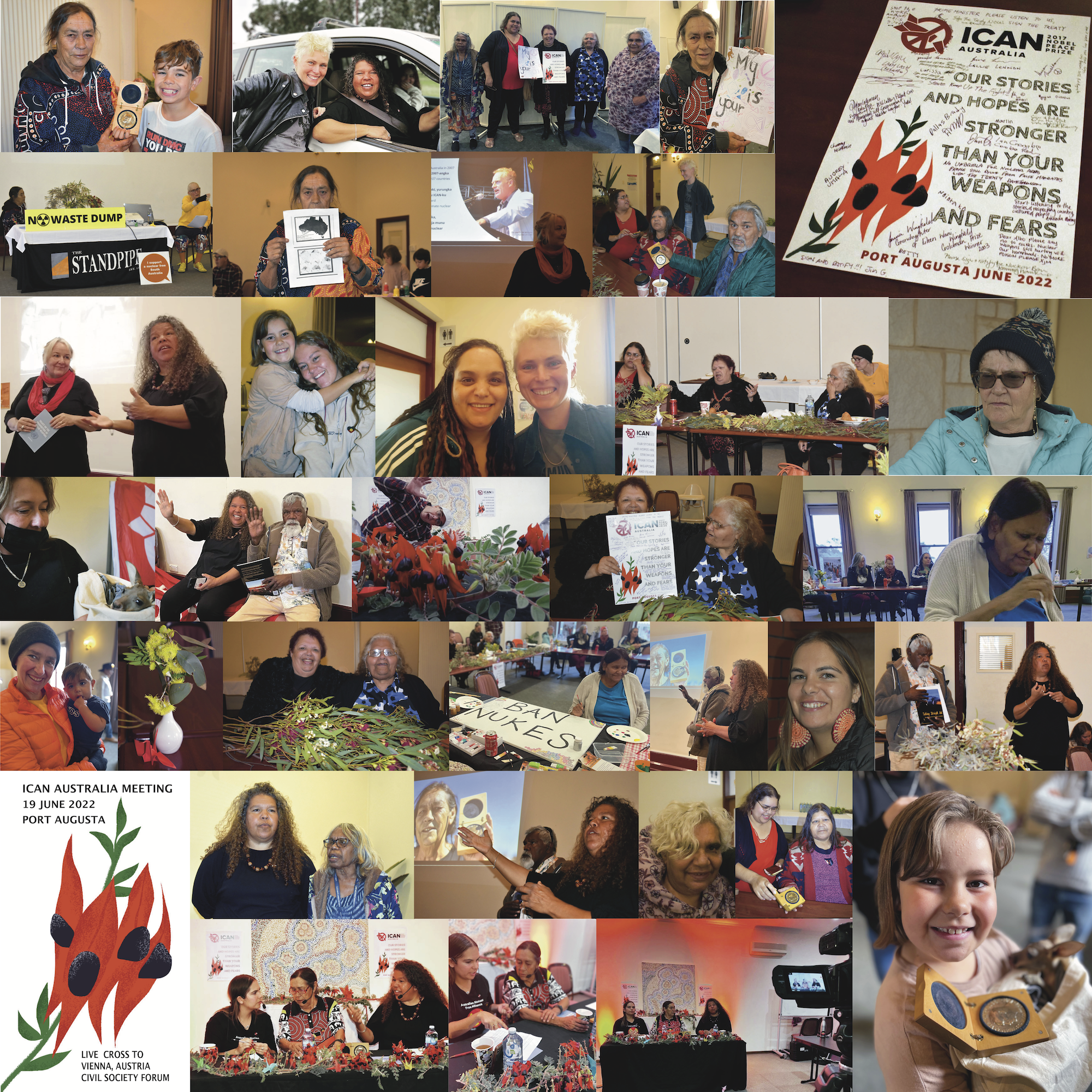 The Port Augusta Hub was part of a series of global events organised by civil society around the First Meeting of States Parties to the Treaty on the Prohibition of Nuclear Weapons (TPNW) in Vienna, Austria on 21-23 June 2022. The TPNW recognises the disproportionate impact of nuclear weapons activities on Indigenous Peoples, and on women and girls, including as a result of ionising radiation.

Australia has not yet joined the TPNW, but attended the First Meeting of States Parties as an observer.

At the Port Augusta Nuclear Ban Hub, ICAN Ambassadors Aunty Sue Coleman-Haseldine, Kokotha woman, and Karina Lester, Yankunytjatjara woman, were chairs and facilitators of the meetings. ICAN Australia was represented by ICAN Australia Director Gem Romuld and ICAN Co-Founder, Dimity Hawkins AM. Other representatives, including members of the Medical Association for Prevention of War and Friends of the Earth Australia, as well as local community
members, contributed to the meeting.

The meeting culminated in a special live broadcast to the ICAN Nuclear Ban Forum in Vienna ahead of the First Meeting of States Parties to the TPNW, in which Aunty Sue Coleman-Haseldine, Karina Lester and Mia Haseldine gave compelling testimonies of the on-going impacts of nuclear weapons testing across three generations. This is available to view in full here.