Statement on Russia’s invasion of Ukraine

ICAN Australia strongly condemns the Russian invasion of Ukraine and Putin’s threat to use nuclear weapons. A war of aggression is never acceptable or lawful. Wars have terrible, long-lasting impacts for civilians. Potential escalation to nuclear war risks catastrophic, existential consequences for the entire world.

The international community must stand united in ensuring that we protect and support civilians, and strongly reject the violations of international law by Russia.

While all wars are unacceptable, ICAN warns that the recent Russian behaviour risks escalating the conflict to one involving nuclear weapons. Last week, Russia conducted a strategic nuclear weapons exercise, practising dropping weapons of mass destruction on civilians with intercontinental ballistic missiles, submarine launched missiles and bombers. Even more concerningly, yesterday morning President Putin stated that: ​​​​ “No matter who tries to stand in our way… Russia will respond immediately, and the consequences will be such as you have never seen in your entire history,” in a thinly-veiled threat to use nuclear weapons, prohibited under the Treaty on the Prohibition of Nuclear Weapons. The use of nuclear weapons remains on the table for all states that possess and deploy nuclear weapons. Putin’s words and actions escalate further the risk of nuclear weapons being used.

This conflict is already harming the civilian population. Adding threats to mass murder civilians indiscriminately with nuclear weapons does nothing to protect people. The only thing nuclear weapons do in this situation is elevate the risk of a massive humanitarian catastrophe.

We urge Russia, Belarus and all other states to not engage in any military activities involving nuclear weapons, such as nuclear weapons exercises and other possible deployments of nuclear weapons. Belarus’ referendum on Sunday to revoke its nuclear-weapon-free pledge in its constitution adds fuel to the fire in an already tense time.

We urge the international community to strongly pressure Russia to engage in dialogue and diplomacy, to return to compliance with the UN Charter, respect international humanitarian and human rights law, join relevant treaties to reduce nuclear weapons risks, including the Treaty on the Prohibition of Nuclear Weapons, and negotiate with other nuclear-armed states the verified, time-bound elimination of all their nuclear weapons. 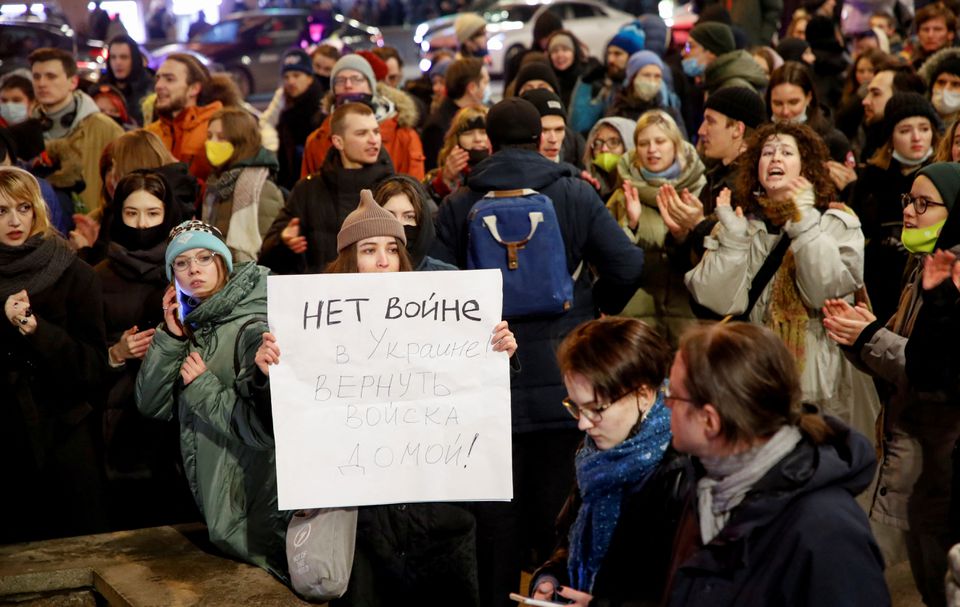 Image: a demonstrator displays a placard during an anti-war protest, after Russian President Vladimir Putin authorized a military operation in eastern Ukraine, in Saint Petersburg, Russia, February 24, 2022. The placard reads: ‘No to war in Ukraine! Return the forces home!’ REUTERS/Anton Vaganov