Sachertorte #3: Conference on the Humanitarian Impacts of Nuclear Weapons

Conference on the Humanitarian Impacts of Nuclear Weapons

Report by Marlon Morice, student at the University of Melbourne and intern with ICAN Australia.

The Conference opened with a video address from Alexander Schallenberg, the Austrian Federal Minister for Europe and International Affairs. Minister Schallenberg stressed that the spectre of nuclear war is now no longer hypothetical for Europeans, and that as long as nuclear weapons exist, they will be a threat to humanity. He also criticised the doctrine of nuclear deterrence, arguing that it inherently requires the threat to use nuclear weapons to be real and credible. Izumi Nakamitsu, the UN High Representative for Disarmament Affairs applauded the humanitarian approach to arms control, as seen in the TPNW. She also made the point that nuclear weapons “cannot be contained by time or space” – meaning it is necessary to work for total abolition, and not just to maintain the status quo. Dr Mohamed Elbaradei, the Director-General Emeritus of the International Atomic Energy Agency evoked the words of the creators of the atomic bomb, such as Robert Openheimer, noting that the horrors of nuclear weapons were immediately apparent, and that we should always strive for their elimination.

Following this, we heard testimony from victims and survivors. Kido Suechi – Secretary-General of Nihon Hidankyo and Hibakusha from Nagasaki – shared his experience of the day the bomb was dropped. He said that the city had “effectively disappeared”, and that he remembers seeing bodies lying in the street with survivors begging for food and water. He regretted the fact that so many lives were ended in an instant, and that so many were to die without the support of their families. He also spoke to the fear and anxiety that many Hibakusha experience throughout their lives as they see the legacy of the bombings in their children and grandchildren. He believes that the TPNW embodies the spirit of the Hibakusha and hopes for the success of the MSP. Suzuka Nakamura, of Know Nukes Tokyo and a third-generation survivor of the bombing of Nagasaki stated that as the number of survivors dwindles, it is incumbent on us to share and pass down their stories and experiences. Finally, Danity Laukon of MISA4ThePacific told the Conference of how, in the course of her advocacy work, she came to realise the need to learn more of the history and legacy of nuclear testing in the Pacific. She talked of the horrifying legacy of testing, including burns, forced displacement, cancers, miscarriages, and stillbirths. 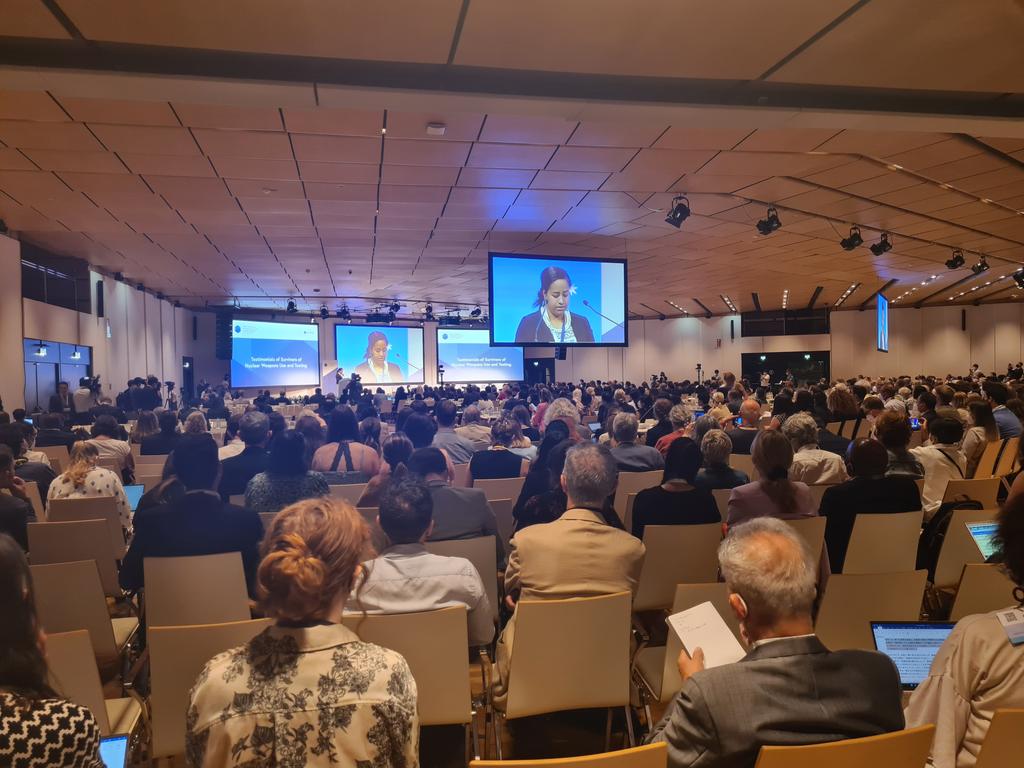 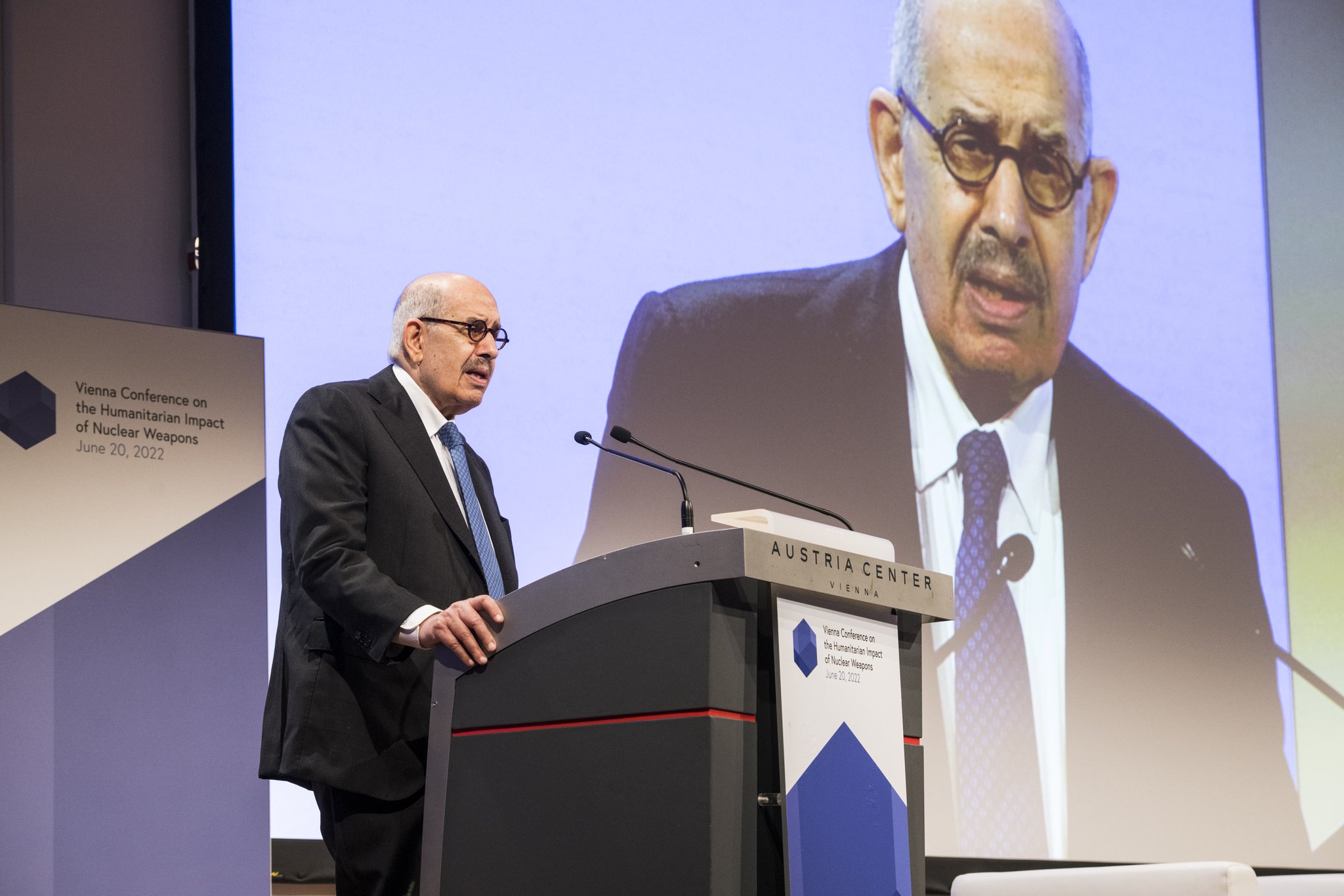 Session 1 – What we Know: Key Facts on Humanitarian Consequences and Risks of Nuclear Weapons.

The first session of the day featured a panel focusing on the short and long-term consequences of nuclear explosions, as well as the challenges that the international humanitarian system will face in the event of a nuclear detonation on a population centre.

Dr Cordula Droege, Chief Legal Officer with the Red Cross, spoke of the reality on the ground following the bombings of Hiroshima and Nagasaki. In particular, she noted that health infrastructure in both cities was wiped out, with many doctors and nurses dying in the blasts. The destructive power of nuclear weapons thus severely limited the humanitarian response. This point was built on by Dr James Revill, Head of the WMD Programme at the UN Institute for Disarmament Research, stating that there is a lack of knowledge in the humanitarian system on how to respond to a nuclear detonation. Dr Revill argued that the world must be better prepared for the humanitarian consequences of such a disaster.

Dr Patricia Lewis, Director of the International Security Programme at Chatham House, presented a history of past experiences of ‘close calls’, which almost resulted in deliberate nuclear disasters. She argued that these are often chaotic scenarios in which the facts and the chain of command are unclear. In many cases it is the caution and restraint of single individuals that avoided catastrophe. While these actions can come as a relief, they also highlight the urgency to abolish nuclear weapons. Finally, Mary Olson, former Senior Radioactive Waste Policy Specialist with the US-based Nuclear Information and Resource Service, highlighted the gender divide of the effects of nuclear weapons. She noted that among children there are two girls for each boy that develops cancer during their lives as a result of nuclear exposure. She stressed the need for more research into the human effects of radiation exposure to develop a better understanding of the dangers.

Following a short break, the panel was joined by retired ambassador Steffen Konstad of Norway along with UN High Representative Nakamitsu. Both Representative Nakamitsu and Ambassador Konstad applauded the actions of campaigners in revitalising the nuclear disarmament process, which had in recent years become “stale”. Both also warned of the growing danger of states seeking to acquire their own nuclear capabilities due to ongoing global insecurity – demonstrating the need for a non-security, humanitarian approach to nuclear weapons. 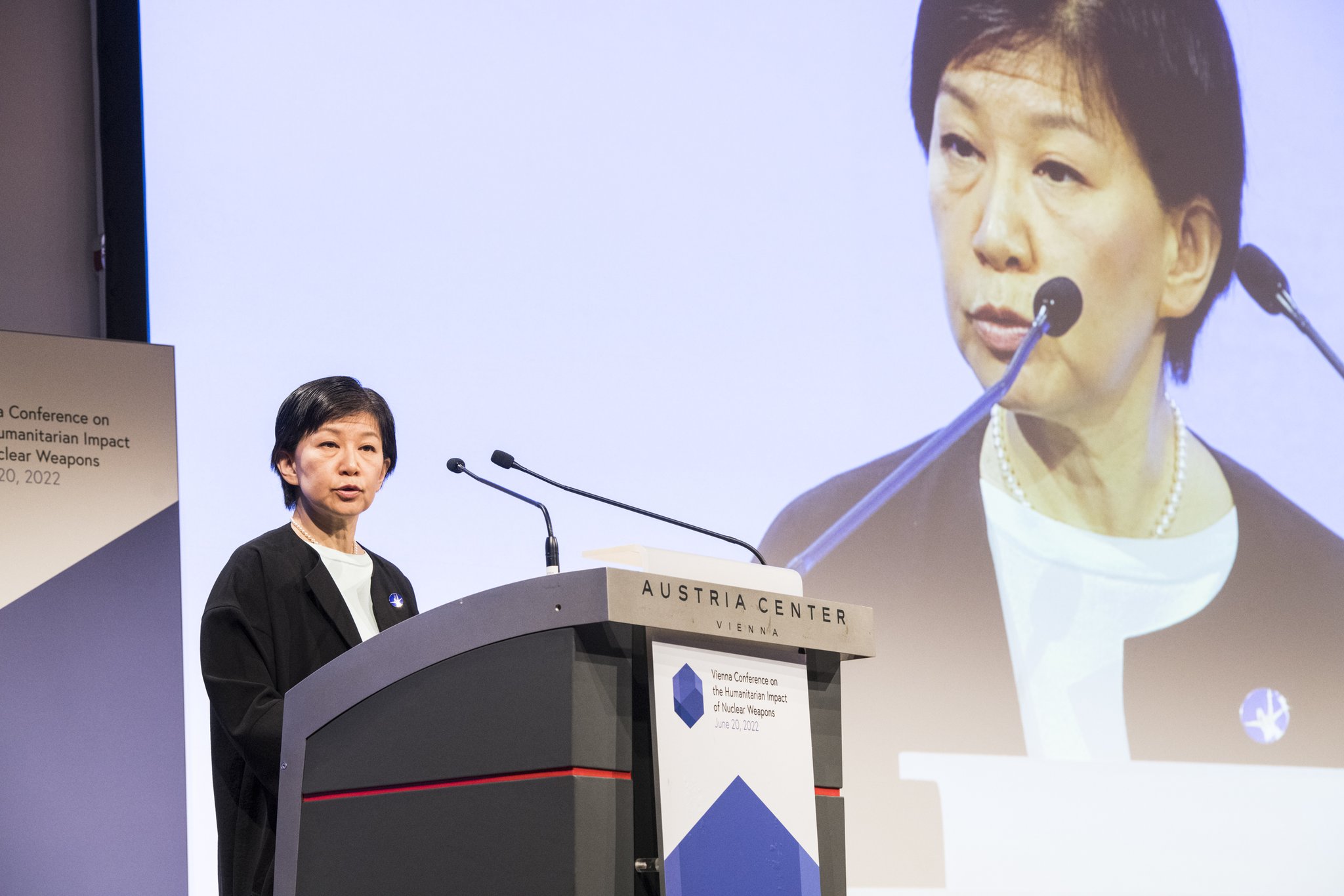 Session 2 – Impact of Nuclear Weapons on People and the Planet: New Developments and Findings

The next session opened with an address from Canadian Chemist and Nobel Laureate Dr John C. Polanyi. He said that scientists have often been complicit in the advancement and development of weapons, including WMDs such as nuclear weapons. Science demands a responsibility to share and collaborate, and scientists have an obligation to “speak the truth”, which has only become more relevant in the realm of nuclear weapons. The scientific methods of reason and rigorous study, Dr Polanyi argues, must be applied to the pursuit of peace and disarmament.

The subsequent panel discussion presented findings and research on the effects of nuclear weapons on communities and the environment.

Dr Moritz Kütt, Senior Research at the Institute for Peace Research and Security Policy, explained the folly of discussing “small” or “tactical” nuclear weapons. He showed a number of diagrams and graphs that demonstrated the sheer scale of modern nuclear weapons, and the massive urban areas that would be desolated by a nuclear detonation. He also showed that health infrastructure would be overwhelmed by even the smallest nuclear weapons, both due to the direct burn injuries, as well as ongoing radiation poisoning. Dr Michael Mills of the National Centre for Atmospheric Research presented the effects of nuclear war on the global climate. He showed models of a nuclear exchange between India and Pakistan, using half of their nuclear stockpiles. This conflict would result in massive amounts of smoke and debris entering the Earth’s atmosphere, causing extended low temperatures not seen since the last Ice Age, while also degrading the ozone layer.

Kim Scherrer of the Department of Biological Sciences at the University of Bergen built on this point by discussing the effect of nuclear war on the global food system She noted that a nuclear war involving only 100 warheads would result in a devastating reduction in agricultural yields, with decreases of around 30% in temperate zones, causing mass starvation and famine. Further, Ms Scherrer added that this research did not even take the effects of radioactive contamination into account, which would have further detrimental effects on global food security.

On the issue of nuclear testing, Associate Professor Alexander Glaser from Princeton University presented his team’s models reconstructing the fallout from past nuclear testing around the world. Specifically, he showed that the effects of testing have been vastly underestimated, highlighting the damaging radioactive exposure of communities and the ongoing harmful legacies. Following this, Dr Toghzan Kassenova, Senior Fellow at the Centre for Policy Research in New York state, told the Conference of the legacy of Soviet nuclear testing in Kazakhstan. She spoke of the secrecy under which the testing was conducted, and of the fact that the Soviet government made no consideration for the people or environment when choosing nuclear test sites. Any medical research that was conducted was not used to help victims, but instead to study the effect of radiation exposure for military purposes. 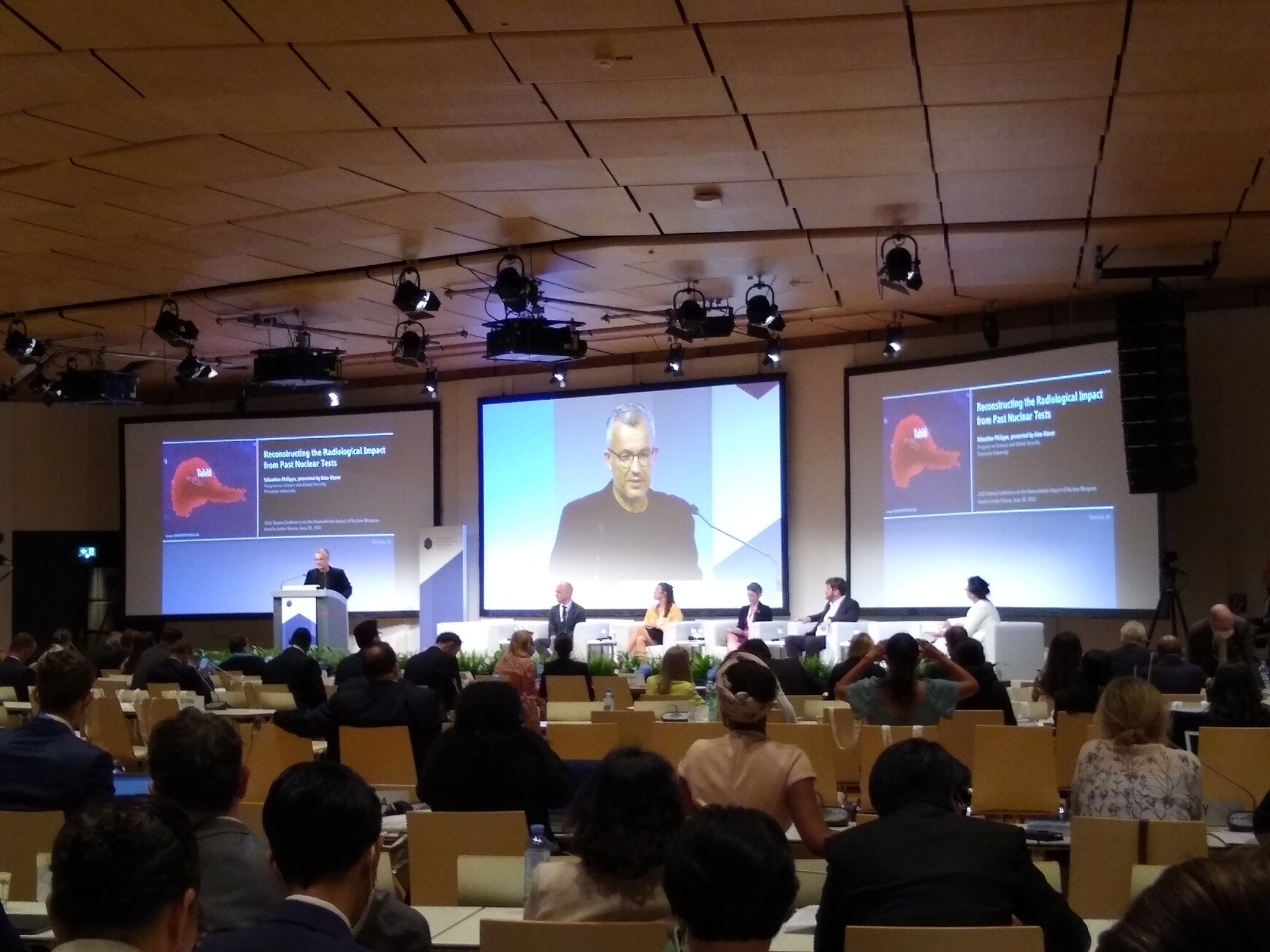 Image: Alex Glaser presents the work of the Moruroa Files, which is an investigation of the real impacts of French nuclear tests in the Pacific.

Session 3 – The Risks of Nuclear Weapons, the Threat of Use and Nuclear Deterrence: New Developments and Findings, and the Limits of Our Knowledge

The final session of the Conference focused on the risk of nuclear war, and how the changing global landscape is increasing the risks of escalation.

Addressing the Conference remotely, Hans Kristensen – Director of the Nuclear Information Project for the Federation of American Scientists – provided an overview of shifts in the rhetoric and doctrines of nuclear states. He argued that rhetoric by nuclear states has become more combative in recent years, with Vladimir’s nuclear threat in Ukraine only the latest example. He stated that the nuclear weapons doctrines of nuclear states such as Russia, China and the U.S. are currently in a state of flux as they reconsider their nuclear strategies. This is fostering uncertainty and insecurity in global politics.

Dr Tytti Erästö, a Senior Researcher at the Stockholm International Peace Research Institute, spoke on technological evolution in the field of nuclear weapons, warning that this is resulting in “new vulnerabilities”. For example, developments in accuracy and remote targeting have provided states with enhanced first-strike capabilities, increasing insecurity and further undermining the theory of nuclear deterrence. Daryl Kimball, Executive Director of the Arms Control Association, explored the risk of nuclear weapons in the context of Russia’s invasion of Ukraine. He argued that Vladimir Putin’s threat to use nuclear weapons has raised the prospect of nuclear confrontation and increased the risk of their use. In particular, Mr Kimball warned that the prospect of a long war in Ukraine means the world may be in a state of heightened risk of nuclear conflict for some time to come. Additionally, he made the point that nuclear weapons have failed to prevent Russian aggression in Ukraine, and have only resulted in the possibility of nuclear confrontation.

Eva Lisowski, an Associate Fellow with the Asia-Pacific Leadership Network, detailed the conditions under which nuclear weapons may be used in Northeast Asia. She presented the results of her team’s research into potential scenarios for the use of nuclear weapons. Specifically, Ms Lisowski showed that there was a wide range of “triggering events” that can lead to a nuclear detonation. History has shown us that events once considered unlikely or impossible can occur rapidly and unexpectedly. Specifically, the team identified periods of leadership change as critical points of vulnerability due to possible shifts in behaviour and strategy. Scenarios ranged from nuclear detonations by non-state actors to lengthy crises resulting in inter-state nuclear warfare.

The final speaker, Dr Zia Mian of Princeton University asked how national stories and identity will manifest during a nuclear crisis, using the example of India and Pakistan. He warned of growing nationalism, and argued that while we know history and identity matters, we do not necessarily know how they will matter. Dr Mian also criticised deterrence theory as an “illusion of control” – the myth that one can be skilled and talented enough to control the decisions of others. It is this belief, he argues, that will lead political and military leaders down the road of escalation towards nuclear conflict.

In his concluding remarks, former Austrian UN Ambassador Thomas Hajoczi called for more research and discussion on the humanitarian consequences of nuclear explosions in order to create a stronger cross-disciplinary understanding of these destructive weapons and their effects. He warned that “nuclear conflict is not an abstract danger, but a very real one”, and that it is only the total elimination of nuclear weapons that will offer true protection against their use.