Labor Policy and the Treaty on the Prohibition of Nuclear Weapons

Support for nuclear disarmament has deep roots in the Australian Labor Party. The legacy of Labor peace activists like Tom Uren endures, from Labor’s role in ratifying the Non-Proliferation Treaty in 1973, to implementing the Canberra Commission in 1995, through to the leadership of one of the Treaty’s strongest supporters, Anthony Albanese.

Labor first committed to signing and ratifying the Treaty on the Prohibition of Nuclear Weapons (TPNW) at its National Conference in 2018, reaffirming that commitment in 2021.

Within a month of its election in 2022, the Albanese Labor Government made the decision to formally observe the First Meeting of States Parties to the UN Treaty on the Prohibition of Nuclear Weapons in June 2022. Susan Templeman MP was the head of the Australian delegation. Then in October 2022, Australia for the first time abstained from voting on an annual UN General Assembly resolution that welcomes the adoption of the TPNW and calls upon all states to sign, ratify, or accede to it “at the earliest possible date”. This move formally brought an end to five years of Australian opposition to the treaty.

Ahead of the vote, the Australian government indicated that it was assessing its position on the TPNW,  “taking account of the need to ensure an effective verification and enforcement architecture, interaction of the treaty with the Nuclear Non-Proliferation Treaty (NPT) and achieving universal support”, adding that it was engaging constructively with the treaty.

In July 2022, it said that it shared “the ambition of TPNW states parties of a world without nuclear weapons” and would examine a number of important questions “to inform its approach to the TPNW in close consultation with partners, and civil society stakeholders”.

“Labor in government will sign and ratify the Ban Treaty, after taking account of the need to:

Moved By Anthony Albanese, and seconded by Richard Marles. Adopted by the 2018 National Labor Conference.

TIMELINE OF LABOR’S PROGRESS TOWARDS JOINING THE TPNW

28 October 2022: In the first committee of the UN General Assembly, Australia abstains for the first time on an annual resolution urging all countries to join the TPNW. Under the Coalition government, Australia had voted “no”.

21–23 June 2022: Following the election of a federal Labor government on 21 May, Australia attends the first meeting of states parties to the TPNW in Vienna as an observer. Susan Templeman, a Labor parliamentarian, heads the official delegation.

2 October 2021: Western Australian Labor adopts a resolution welcoming the TPNW’s entry into force and urging federal Labor “to commit to consider, sign and ratify the treaty in the first term of an elected federal Labor government”.

30 March 2021: At a special platform conference, federal Labor reaffirms its commitment to sign and ratify the TPNW in government.

23 January 2021: Federal Labor welcomes the entry into force of the TPNW. Albanese and Wong reiterate: “We have committed to signing and ratifying the treaty after taking account [of] the need to ensure an effective verification and enforcement architecture, interaction of the treaty with the Nuclear Non-Proliferation Treaty, and achieving universal support.”

25 October 2020: In a statement issued by Albanese and Penny Wong, federal Labor welcomes the 50th nation ratifying the TPNW – the threshold required for its entry into force – and congratulates ICAN “for the significant milestone”.

19 October 2019: Northern Territory Labor adopts a resolution asking the next Labor national conference “to reaffirm its commitment to sign and ratify the [TPNW] immediately upon taking up government”.

12 October 2019: South Australian Labor adopts a resolution urging federal Labor to begin discussions on resolving issues relating to the TPNW “with a view to Australia signing the treaty as soon as possible”.

25 August 2019: Western Australian Labor adopts a resolution calling on the Australian government “to sign and ratify the [TPNW] as an urgent humanitarian imperative”.

20 September 2018: Marking the first anniversary of the TPNW’s opening for signature, Albanese addresses a rally of activists in Canberra who had ridden 900 kilometres from Melbourne. He thanks ICAN for promoting “locally, nationally and internationally” the importance of a world free of nuclear weapons.

9 September 2018: Tasmanian Labor adopts a resolution calling on federal Labor “to make a firm commitment to sign and ratify the [TPNW] when Labor next forms government”. It says that “Australia joining the nuclear ban treaty is an essential step on the path towards the total elimination of nuclear weapons”.

23 October 2017: Albanese tables a petition in the federal parliament appealing to the prime minister, Malcolm Turnbull, to join the TPNW. “Nuclear weapons are the most destructive weapons on earth,” he says. “They pose a threat so grave, they’re an existential risk to all humanity.”

3 August 2017: Following the adoption of the TPNW by 122 countries on 7 July, Albanese becomes one of the first politicians in the world to sign ICAN’s parliamentary pledge – a personal commitment to work for Australia’s signature and ratification of the treaty.

28 March 2017: As negotiations for the Treaty on the Prohibition of Nuclear Weapons (TPNW) commence in New York, Albanese expresses regret at Australia’s absence: “I think the Australian people will be disappointed that Australia is choosing to not even participate in the forum.”

9 November 2016: Albanese welcomes the decision of the UN General Assembly to commence negotiations in 2017 on a “legally binding instrument to prohibit nuclear weapons” and urges the Coalition government to “stop working to undermine this process”.

12 February 2015: Anthony Albanese MP, together with 837 other parliamentarians from 42 countries, signs an ICAN appeal calling on governments to negotiate “a treaty banning nuclear weapons and leading to their complete eradication”. 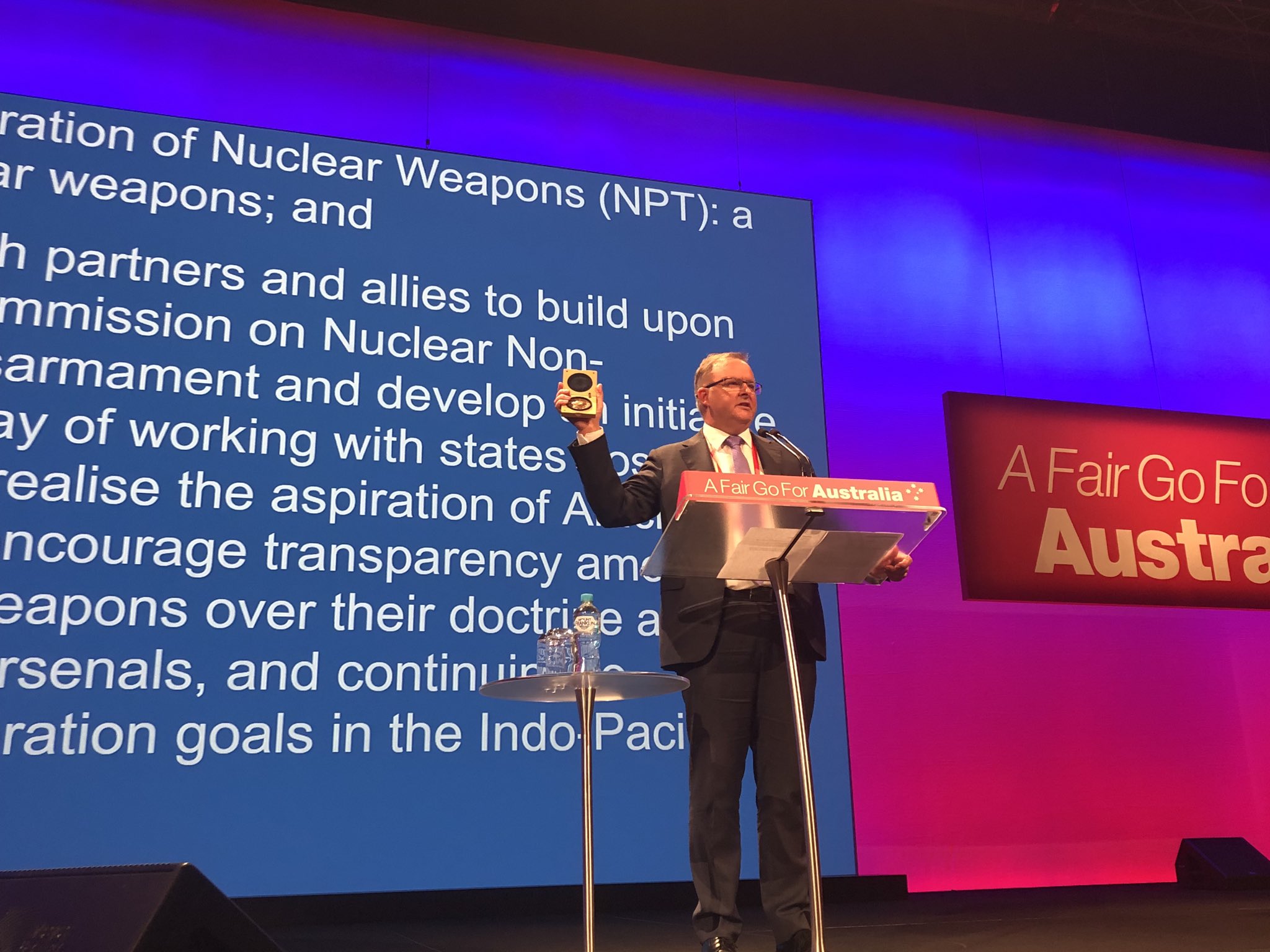 Anthony Albanese MP holds ICAN Nobel Peace Prize medal while moving the resolution to commit a future Labor Government to signing and ratifying the Treaty on the Prohibition of Nuclear Weapons, 18 December 2018. Read the speech here. 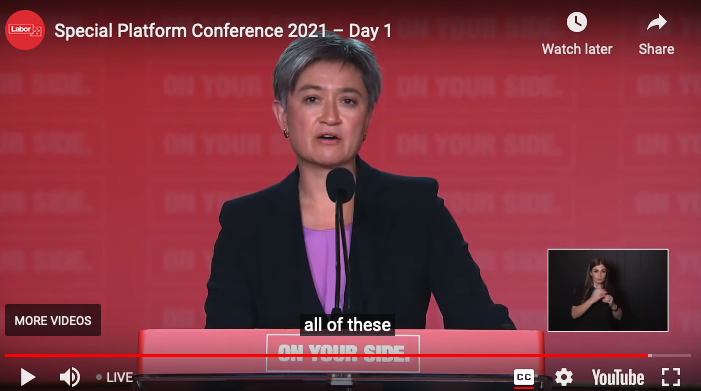 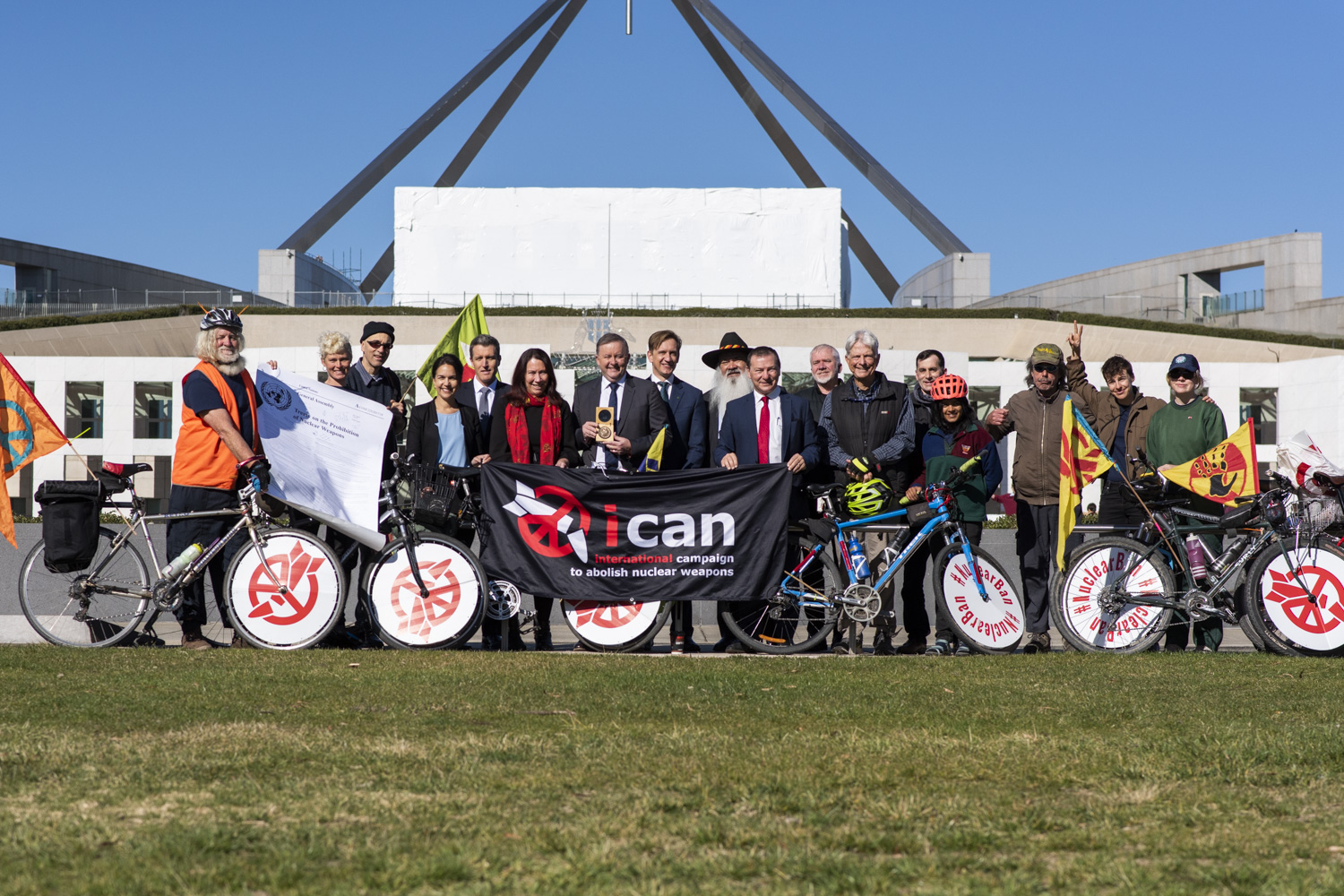 Labor parliamentarians welcome the arrival of the ICAN Nobel Peace Ride in Canberra after cycling 900km from Melbourne, 18 September 2018.