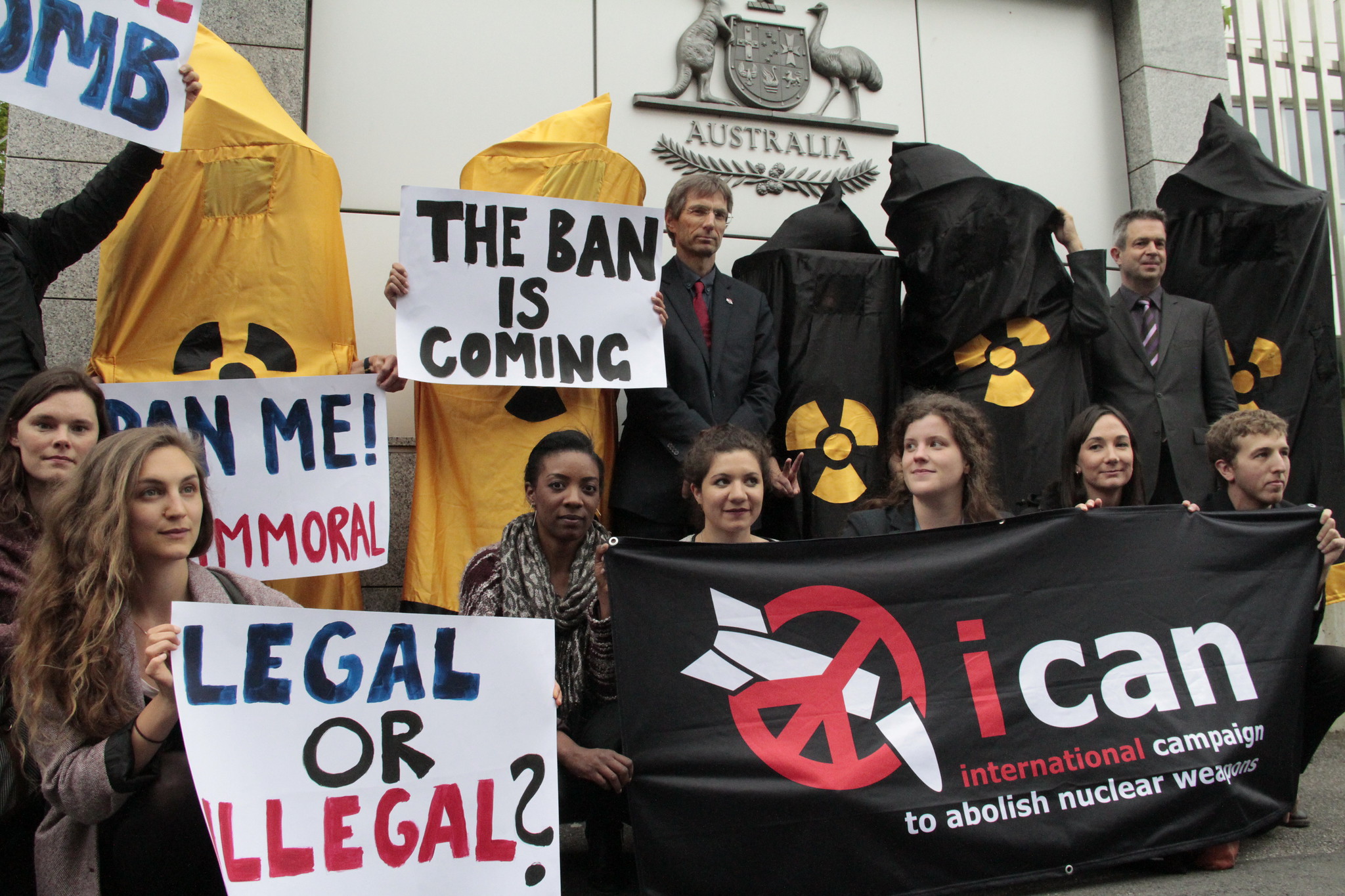 This report, based on freedom of information research, describes Australia’s obstructive role at the recently concluded UN working group on nuclear disarmament in Geneva, which recommended negotiations on a treaty banning nuclear weapons in 2017. Australia argues that US nuclear weapons are vital for its security, and thus it opposes a ban.

Article in The Guardian →

In December 2015, the United Nations General Assembly voted – 138 states in favour, 12 against – to establish an “open-ended working group” that would “substantively address” effective legal measures and norms for achieving a nuclear-weapon-free world. All UN member states were invited to participate.

Australia abstained from the vote, concerned that the new UN body would become a vehicle for advancing negotiations on a nuclear-weapon-ban treaty – which it opposes. Nevertheless, it participated in the group’s three substantive sessions, held in Geneva in February, May and August 2016.

Documents released to ICAN by the Australian foreign ministry in October under freedom of information laws show that the government attended the first session “open-eyed” about the strategy of a core group of nations, including New Zealand, to establish the foundations for commencing negotiations on a “ban treaty” for nuclear weapons. There was “[a]n undercurrent of support” for this.

“Does the government oppose a ‘nuclear ban treaty’ due to Australia’s reliance on extended nuclear deterrence?” internal talking points ask. The suggested answer: “We must be realistic about the environment in which we operate.” The government cites North Korea’s nuclear weapons programme as providing justification for its opposition.

“So long as the threat of nuclear attack and coercion exists, US extended nuclear deterrence will serve Australia’s fundamental national security interests,” one document states. Were Australia to join the future treaty outlawing nuclear weapons, it would no doubt be required to renounce this doctrine.

Australia hosted meetings at its Geneva mission with diplomats from a handful of other nations that claim “protection” from US nuclear weapons – including five that host US nuclear weapons on their territory as part of a NATO arrangement – to help coordinate their contributions to the working group, and to “refresh our narrative”.

“Our involvement [in the working group] allows us to provide a strong alternative viewpoint, notably against those states who wish to push a near-term ban treaty,” Australian officials wrote in one of the FOI documents. As the United States and other nuclear-armed nations had chosen to boycott the talks, Australia and its coterie were left with the task of thwarting moves towards a ban.

In one memo, Australia expressed concern that the working group was “tracking towards recommendations on a nuclear weapons ‘ban treaty’”, and another suggests that Australia remained in “close contact” with the United States “about our shared concerns” that the working group was “likely to recommend negotiations on a ‘ban treaty’” (although “the US” has been redacted).

In a diplomatic cable dated 4 March, Australia’s Geneva-based representatives reported to Canberra that the discussion panels at the February session had been “skewed towards the humanitarian approach” – that is, an approach focusing on the harmful effects of nuclear weapon detonations on human beings and the environment, as opposed to abstract notions such as geostrategic stability and deterrence.

“Predictably, much of the civil society coverage [of the February session] focused on those states advocating a ban treaty,” the Australian diplomats wrote. “Most tweets gave primacy to arguments advocating immediate legal measures, notably the ban treaty.” Australia and other anti-ban nations that attended the session were presented “as a key obstacle to progressing nuclear disarmament”, they complained.

In the middle of the May session, Australia’s prime minister, Malcolm Turnbull, announced that a general election would be held on 2 July. Operating under so-called caretaker conventions, the government then instructed its diplomats in Geneva to “take a lower profile” in the discussions. “This will mean relying on other like-minded countries to be active, including in raising questions to dispel the myths around a ‘ban treaty’,” a cable said.

Upon the conclusion of the May session, Australian diplomats reported home that the working group had “lent further momentum to an early start on multilateral negotiations on a ban treaty”. In Australia’s assessment, New Zealand, Brazil, Egypt, Ireland, Mexico and South Africa – members of a group called the New Agenda Coalition – had run “a well-oiled campaign to this end”.

“A striking feature of the May session was the mobilisation of civil society, deftly coordinated with prohibition-treaty-supporting member states,” the diplomats wrote. “The singular ban-treaty focus of these groups created a campaign-like atmosphere during the proceedings.”

Australia and other anti-ban nations had “stepped up [their] engagement in response”, “taking issue with the arguments of ban treaty proponents, raising concerns about security [and] claims of the existence of a legal gap”. (Since December 2014, 127 nations have pledged to cooperate in efforts “to fill the legal gap” in the existing regime governing nuclear weapons. These remain the only WMD not yet banned.)

During the May session, a cross-regional group of nations, including Indonesia, submitted a working paper proposing that the UN General Assembly convene a conference in 2017 “to negotiate a legally binding instrument to prohibit nuclear weapons”.

In reaction to this, Australian officials prepared talking points for the foreign minister, Julie Bishop, in case any journalist were to ask her about “Indonesia’s proposed conference”. “The proposed conference is one of many ideas suggested to the OEWG [open-ended working group] for further discussion,” they encouraged her to say, without rejecting the idea.

At the August session, the proposal to convene a conference in 2017 to commence negotiations on a nuclear-weapon-ban treaty had become the main point of debate. The chair’s draft report of the working group, to be submitted to the UN General Assembly’s First Committee, said that a “majority of states” had expressed their support for such a conference. But Australia disputed the accuracy of that claim.

This prompted various regional groups, representing all of the nations of Africa, Latin America, the Caribbean and Southeast Asia, along with several Pacific island and European states, to deliver statements confirming their support for the proposed conference. By the end of the session, at least 107 had done so – an overwhelming majority. Yet Australia continued to argue against including the word “majority” in the report.

Following a week of intense negotiations – including in closed-door meetings and over dinner at the chair’s private residence – the participating states appeared to have reached agreement on a compromise text. The report would simply “recognize” that a recommendation had been made to convene a conference in 2017 to negotiate a ban – a recommendation that had received “widespread support”.

But Australia was unable even to accept this formulation. In the closing session on 19 August, it informed the working group – with well over one hundred nations in the room – that it could not support the report, as it gave undue prominence to the ban treaty. The chair then offered to insert a note into the report to reflect Australia’s decision to dissociate itself from it. Still, this was not enough.

Australia, acting alone (but with the encouragement of the United States, according to diplomatic sources), forced a vote on the report – even though it had been painstakingly negotiated with the expectation that it would be adopted with unanimous support. Australia’s extraordinary manoeuvre infuriated both supporters and opponents of a ban.

And it prompted Guatemala to propose a last-minute amendment. If nations are to be forced to vote, they should do so on a clearly worded recommendation to commence negotiations in 2017 on a ban treaty (not on the watered-down text). And so that is what they did. The report was adopted with overwhelming support, and Australia left the meeting red-faced.

Asked by the Guardian newspaper why the government had decided to call the vote, a foreign ministry spokesperson responded: “It was the most effective way to register our opposition to a recommendation to start negotiations on a ban treaty. A consensus report was not possible in the circumstances.”

On 21 September, during a high-level segment of the 71st session of the UN General Assembly, Austria’s foreign minister, Sebastian Kurz, announced that his country would join other UN member states in tabling a resolution to give effect to the key recommendation of the UN open-ended working group.

A few days later, Austria, Brazil, Ireland, Mexico, Nigeria and South Africa circulated a draft of the resolution, which proposes 20 days of negotiations in New York in 2017 on “a legally binding instrument to prohibit nuclear weapons, leading towards their total elimination”.

This document is now under consideration in the First Committee of the General Assembly, which deals with disarmament and international security matters. All nations will be asked to vote on it in the final week of October or first week of November. The proposed treaty would place nuclear weapons on the same legal footing as chemical and biological weapons, which have long been prohibited under international law.