ICAN Australia notes with deep concern that the Doomsday Clock has been set at 100 seconds to midnight for 2020 – closer to apocalypse than ever.

The 2020 Doomsday Clock Statement highlights that the two simultaneous existential dangers to humanity – nuclear war and climate change – are worsening and effective action to address them is lacking. As a result, the international security situation is now more dangerous than it has ever been, even during the depths of the Cold War. The Statement makes plain that the need for emergency action to reduce nuclear dangers and turn around world greenhouse gas emissions is urgent.

The Statement confirms that current policies and actions worldwide and in Australia are undeniably not up the task of getting rid of nuclear weapons or getting net carbon dioxide emissions down to zero.

“The Doomsday Clock is ticking loud for all of us. It is increasingly urgent important that the Australian government take effective action to reduce the growing nuclear danger”, said ICAN’s A/Professor Tilman Ruff AO. “Australia needs to get on the right side of history. Just as we have joined the treaties banning biological and chemical weapons, landmines and cluster munitions, we need to join rather than oppose the global treaty that bans the worst of all weapons, the Treaty on the Prohibition of Nuclear Weapons.”

“A summer of unprecedented fire disaster is a stark reminder of the urgent need for protection through preventive action. A safe and stable climate demands action to prevent both runaway global heating and the abrupt ice age that would follow nuclear war. The best way to prevent nuclear war is to join and work to implement the global nuclear weapons ban treaty.” 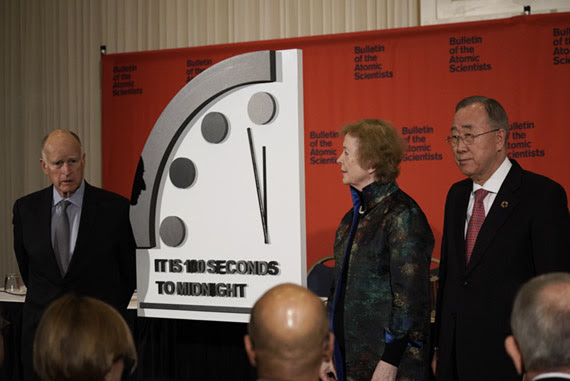 Background paper: “Nuclear weapons and our climate“ published by ICAN Australia in September 2019.

The Doomsday Clock  was established in 1947 as an initiative of the Bulletin of the Atomic Scientists. It has become the most widely recognised indicator of the world’s vulnerability to catastrophe – from nuclear weapons, climate disruption and new technologies. It is set independently of governments and corporations in January each year through deliberation of the Bulletin’s Science and Security Board, in consultation with its Board of Sponsors, which includes 13 Nobel laureates.

ICAN – the International Campaign to Abolish Nuclear Weapons – is a global campaign committed to the abolition of nuclear weapons. In 2017 it became the first Australian-born Nobel Peace Prize winner for its work to draw attention to the catastrophic humanitarian consequences of any use of nuclear weapons and for its role in the achievement of the ground-breaking UN Treaty on the Prohibition of Nuclear Weapons.