The ICAN Cities Appeal was endorsed by the Mount Isa City Council on 10 February 2021.

2. That Council advise the Minister for Foreign Affairs of the endorsement.

2021: Mount Isa City Council published this article on the council website, celebrating their decision to endorse the ICAN Cities Appeal.

Mount Isa City Council has become the very first Council in Queensland to officially endorse the International Campaign to Abolish Nuclear Weapons’ (ICAN) Cities Appeal, giving their backing to the Treaty on the Prohibition of Nuclear Weapons.

The decision was made at Council’s Ordinary Meeting held on Wednesday, February 10. Council will soon advise Federal Foreign Affairs Minister Marise Payne of the decision.

Mayor Danielle Slade said Council was impressed by a presentation made by representatives of ICAN Australia and the Women’s International League for Peace and Freedom in November last year.

“ICAN has also indicated to us that, by endorsing the appeal, they will be able to arrange for their representatives to visit us with the Nobel Peace Prize that ICAN won in 2017, the same year the Treaty on the Prohibition of Nuclear Weapons was adopted by the United Nations,” Cr Slade said.

“Our city is deeply concerned about the grave threat that nuclear weapons pose to communities throughout the world. We ﬁrmly believe that our residents have the right to live in a world free from this threat.

“Any use of nuclear weapons, whether deliberate or accidental, would have catastrophic, far-reaching and long-lasting consequences for people and the environment.”

More than 25 councils in Australia have already endorsed the Cities Appeal, including Melbourne, Sydney, Canberra, Hobart and Fremantle, calling on the government to sign and ratify the treaty, which prohibits the use, production and stockpiling of nuclear weapons and lays the foundations for their total elimination. 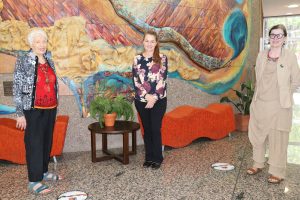 Mount Isa Mayor Danielle Slade with Delene Cuddihy and Valerie Joy from the Women’s International League for Peace and Freedom (WILPF) who visited Mount Isa in October 2020 to share the message about the Treaty on the Prohibition of Nuclear Weapons.

2021: The ICAN Nobel Peace Prize is presented to Mount Isa councillors and community to celebrate their endorsement of the Cities Appeal at special events coordinated by the Women’s International League for Peace and Freedom (WILPF). 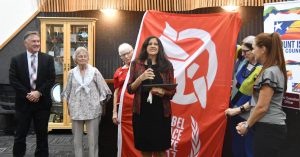 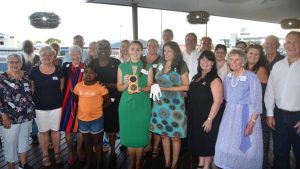 The events were attended by Mount Isa city councillors, Rotarians, faith leaders, Traditional Owners, and representatives from the Red Cross, the Country Womens’ Association and other communinty groups and were covered in local media.