Last week saw the momentous first Meeting of State Parties (1MSP) in Vienna for the Treaty on the Prohibition of Nuclear Weapons (TPNW). At this meeting, representatives and delegates adopted two major documents, setting out a framework for implementing the TPNW and working towards the total elimination of nuclear weapons. The first document – the Vienna Declaration – describes the commitment of States Parties to the articles and values of the TPNW, while the second document – the Vienna Action Plan –  details the concrete steps that countries must take to implement the Treaty.

Of course, not everyone has the time or patience to read through complicated international agreements. So here is an overview of the important points from these historic documents, and how they relate to the TPNW.

The Vienna Declaration represents a political statement by the States Parties to the TPNW outlining their commitment to the treaty and its values, affirming their “determination to realize the complete elimination of nuclear weapons,” and to chart a “path forward for the full and effective implementation of the Treaty.”

The Declaration also set forth the moral and ethical imperatives that underpin the TPNW. It states that “the catastrophic humanitarian consequences of nuclear weapons” are “incompatible with respect for the right to life.” These include the unimaginable levels of death and destruction, as well as the “profound” long-term environmental and health effects that so many are living with today. The Declaration also notes the risk of a nuclear detonation, whether by accident or by design, means that “we cannot afford to wait.”

Furthermore, the participants of the 1MSP expressed their deep concern and dismay at threats to use nuclear weapons, as well as their ongoing role in countries’ security strategies – with there now being nearly 13,000 nuclear weapons stationed around the globe. They declared that far from ensuring peace and security, nuclear weapons are “linked to coercion, intimidation and the heightening of tensions.” It is for this reason they called for an end to current moves by nuclear states to modernise and expand their nuclear arsenals.

Participants conveyed a commitment to international cooperation between governments, the United Nations, and international society. The issues of Universality and Complementarity – two important aspects of the TPNW – are also addressed in the Declaration, committing States Parties to growing membership of the Treaty, and cooperating with all countries in forums such as Non-Proliferation Treaty Review Conferences.

The Declaration concludes that although the Treaty signatories “have no illusions about the challenges and obstacles” that lie ahead, they are committed to moving ahead “with optimism and resolve.”

VIENNA ACTION PLAN
The Action Plan includes 50 Points outlining the practical ways that members of the TPNW can “facilitate effective and timely implementation” of the articles of the Treaty and the commitments expressed in the Vienna Declaration. This includes commitments for future discussions, as well as setting out the work to be done between now and the Second Meeting of States Parties next year in New York.

Universalisation is represented by Article 12 of the TPNW, which states that “Each State Party shall encourage States not party to this Treaty to sign, ratify, accept, approve or accede to the Treaty, with the goal of universal adherence of all States to the Treaty“. Important Action Points here include commitments to conduct ministerial or diplomatic missions to non-Party countries to encourage them to join (Action 3), and to appoint representatives within governments responsible for promoting the TPNW (Action 6). Other strategies for growing TPNW membership include raising awareness of the Treaty at international conferences and events, or at regional meetings (Action 7), as well as engaging with nuclear-armed countries, and countries that rely on nuclear weapons for deterrence to promote the treaty and its values (Action 12)

Towards the Elimination of Nuclear Weapons

Article 4 of the TPNW calls for the establishment of a Competent International Authority, which would support the goal of eliminating nuclear weapons by overseeing and verifying the dismantling and destruction of nuclear weapons and related facilities. As this will be one of the most significant undertakings of the TPNW, the Action Plan calls for additional discussion and dialogue during the intersessional period before the next Meeting of States Parties (Action 15). This will help determine the structure and functioning of such an Authority.

Importantly, the 1MSP established a 10-year deadline by which nuclear-armed states must eliminate their nuclear weapons stockpiles when they join the TPNW. Moreover, upon joining the TPNW countries will have 90 days to remove nuclear weapons owned by other countries from their soil.

Two of the most innovative and significant aspects of the TPNW are Articles 6 and 7. Article 6 establishes positive obligations for States Parties to ensure sufficient and equitable assistance to victims of the use and testing of nuclear weapons, as well as to take necessary measures for environmental remediation of contaminated areas. Article 7 requires states to provide affected states with financial and technical assistance to aid them in fulfilling their obligations.

The Action Plan sets out a number of steps governments must take to implement Articles 6 and 7. Countries are to create domestic government processes for victim assistance and environmental remediation, including adapting or adopting national laws, and to appoint a representative to oversee this work (Actions 21 and 22).

To help implement these commitments, affected states agreed to assess the health and environmental effects of nuclear weapons use and testing to determine the needs of victims and the extent of contamination (Actions 33 and 34).

Ensuring that the TPNW complements and enhances existing nuclear weapons agreements, such as the Non-Proliferation Treaty (NPT) and regional Nuclear-Weapons Free Zones, was an important issue addressed at the 1MSP. The Action Plan states that TPNW “builds upon, contributes to and complements a rich and diverse disarmament and non-proliferation architecture”

The Action Plan includes a number of points on enhancing and implementing inclusivity standards included in the TPNW. Countries are required to incorporate gender considerations in the implementation of the Treaty (Action 39). Further to this, the Action Plan recommends that gender considerations be taken into account in all TPNW-related work (Action 47), to establish a Gender Focal Point to coordinate this work (Action 48), and to establish guidelines for age- and gender-specific Victim Assistance (Action 49).

TPNW members are also called to ensure the participation of all affected communities, and in particular that of Indigenous peoples (Action 41). 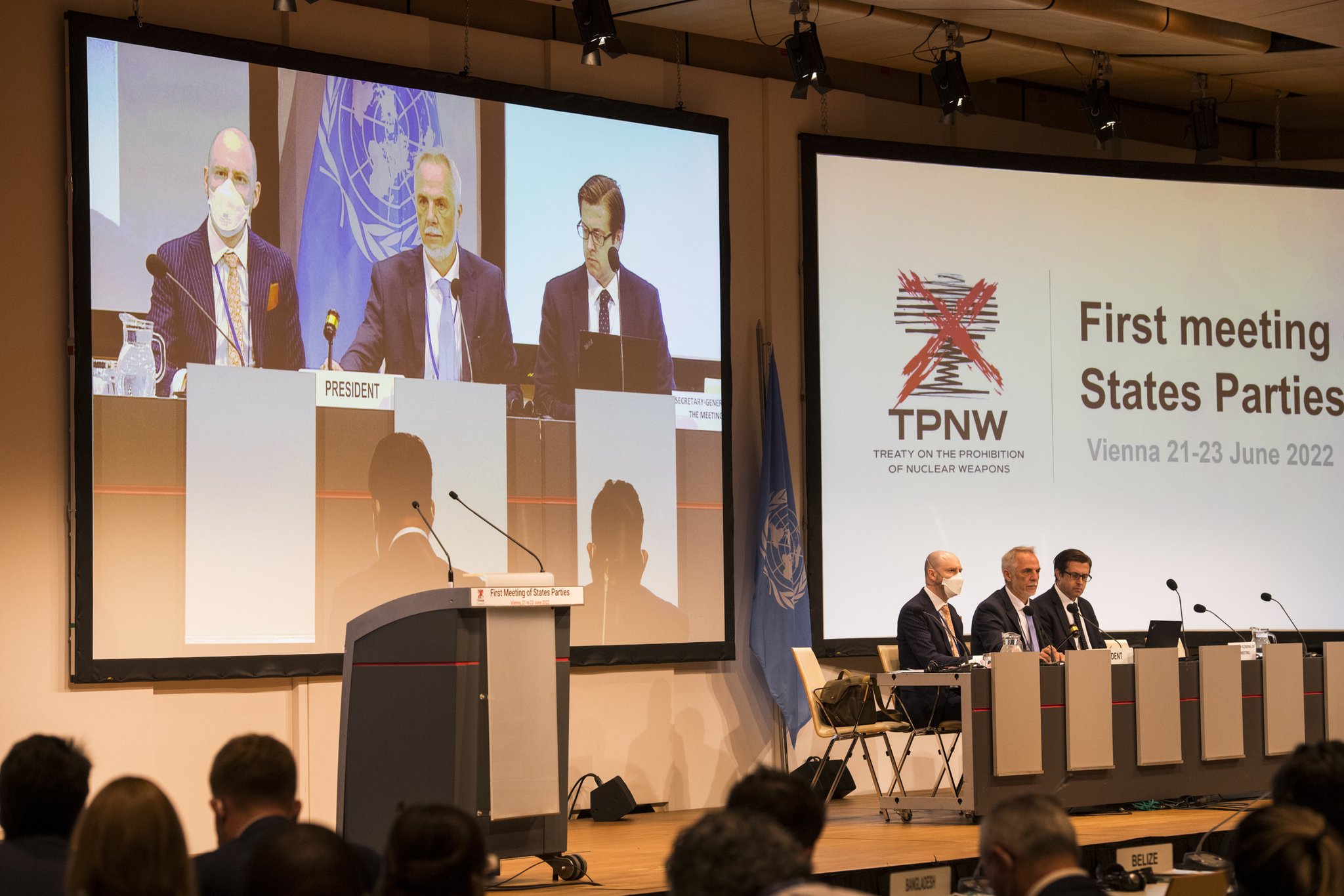 Image: Ambassador Alexander Kmentt (middle) presides over the First Meeting of States Parties to the TPNW on 21-23 June 2022.