Statement on victim assistance at 1MSP

Peace Boat’s Meri Joyce presented an abbreviated version of the following statement at the First Meeting of the States Parties to the Treaty of the Prohibition of Nuclear Weapons at the United Nations in Vienna on June 22, 2022. It includes part of the testimony of Mia Haseldine, Kokatha woman, who spoke during the broadcast from Port Augusta to the Nuclear Ban Forum on June 19.

Your excellencies, delegates, and friends,

Thank you for the opportunity to speak on behalf of Japan-based international NGO, Peace Boat, working since 1983 with impacted peoples and communities in Japan and around the world, including Australia, where I am from.

I would like to recognise those with first hand experience of nuclear impacts, whose appeal realised the Treaty on the Prohibition of Nuclear Weapons. The testimony of survivors heard this week underscores its importance, and the insufficiency of current national systems and international support. I begin by acknowledging those impacted persons and survivors, including those here in Vienna, here in spirit, and those who are no longer with us.

Last December, Peace Boat and ICAN co-organised the World Nuclear Survivors Forum, where survivors from all 5 continents came together to share their situations, efforts and needs, speaking of harms to health, livelihood, culture and environment. These are not a problem of the past; they are long-lasting. Health impacts are felt now, and people are dying every day. The radiation will not go away, and the trauma passes from generation to generation. Our statement today consists of messages from this Forum, recommendations on Articles 6 and 7 by a coalition of Japanese civil society, and testimonials heard in the days preceding this First Meeting of States Parties.

Firstly, we emphasise that humanitarian impacts of nuclear weapons are an ongoing generational struggle. Abnormalities are still being observed even in fourth generations. Survivors tell us not only of the physical impacts of nuclear weapons, but also the social and psychological. Nagasaki Hibakusha Kido Sueichi, here today, tells of the torment of not being able to help suffering children or parents in the wake of the atomic bombing, and the constant worry throughout survivors’ lifetimes of the “ticking time bomb” that a fatal illness may develop. Further, many of these ongoing and intergenerational impacts are not recognised. We heard how in the Marshall Islands, secondary illnesses like diabetes and other non-communicable diseases arise because people are denied access to their traditional and now contaminated lands, and their cultural knowledge. Kokatha woman and third-generation survivor of British nuclear tests in Australia, Mia Haseldine, spoke of post-traumatic stress following the death of her unborn daughter who in utero developed tumour-shaped growths and tumours in her kidneys, heart and brain. She fears her children could one day experience the loss that she has felt. These lasting intergenerational impacts underscore the need for assistance even decades later. States Parties must include multigenerational impacts and a broad understanding of ongoing nuclear harm, including psychological, in the provision of assistance.

We also highlight that existing national assistance programmes are insufficient, and call on States Parties to carry out thorough surveys of the various legal and health systems in place for impacted people and communities. Structural and exclusionary inadequacies must be addressed in a broadened framework of impacted populations that moves beyond identification of victims by administrative boundaries to a truly survivor-led approach, encompassing the myriad impacts and ongoing harm, including those which have remained unrecognised. We call for a broader definition of survivors, as determined by survivors themselves, and a declaration of responsibility and determination.

Given the history of deceit and cover-up from governments about nuclear weapons, we emphasise the need for more research and data. Censorship and silencing is part of the embedded structure of nuclear colonialism and racial discrimination, and must be recognised. Research and data must be made available to the survivors, communicated in culturally appropriate and accessible ways, including translation into languages spoken by members of impacted communities.

We stress the importance of education and awareness raising about the history and legacy of nuclear weapons, keeping the stories of previous generations alive, and including them within school curricula – a field where both States Parties and civil society have a significant role. More must be done to counter the persistent narratives designed to minimise the impacts of nuclear weapons on communities, populations and environments.

Implementation of Articles 6 and 7 should be done within a framework of solidarity with not only affected states, but all States Parties, and even those outside the Treaty. Implementation should be practical and immediate, with regular reporting and the participation of civil society, including victims themselves, in a manner open and accessible to affected communities. We recommend the States Parties establish a permanent body to receive and consider information, and seek to establish an international trust fund for implementation.

Above all, we call on the States Parties to affirm that affected individuals must be at the centre of discussions on victim assistance and environmental remediation, seeking input from all relevant stakeholders including a broad range of all those who self-identify as nuclear victims. In order to adequately assist those who have been historically rendered invisible, the States Parties should engage in assistance with the goal of “no one left behind.” We encourage representatives to visit Hiroshima, Nagasaki, and other nuclear-affected areas and communities around the world, engage in dialogue with victims and conduct site visits in order to understand nuclear harm and provide the assistance sought by victims themselves.

And first and foremost, we call on all governments to join the Treaty on the Prohibition of Nuclear Weapons, as a step toward providing better support and services for survivors around the globe, and ensuring that the utmost wish of the survivors is realised – to prevent anyone else from suffering as they have. 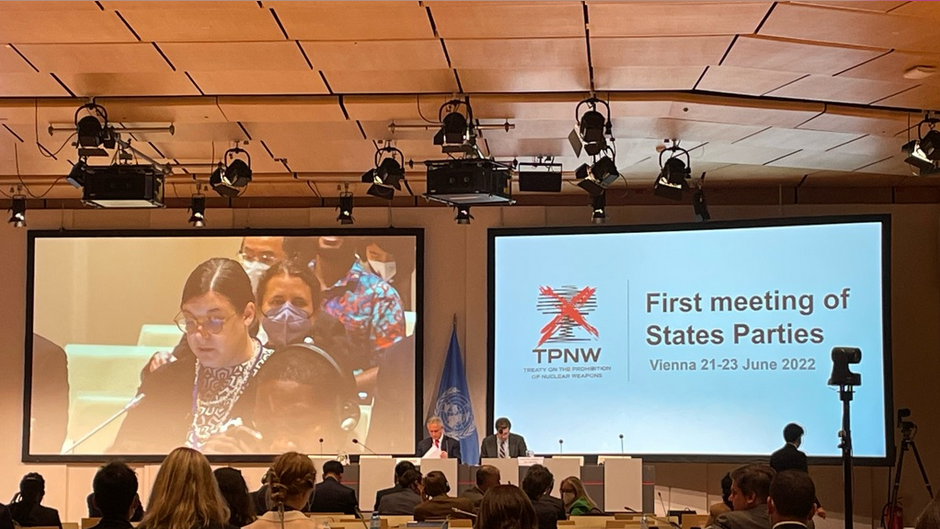