Despite the ongoing impact of the coronavirus pandemic, the Treaty on the Prohibition of Nuclear Weapons continues to progress. This month Sudan signed and Fiji and Botswana ratified the agreement, bringing the total number of signatories to 82 and states parties to 40. The TPNW will enter into force after 10 further ratifications.
The Fijian ambassador to the United Nations, Satyendra Prasad, announced Fiji’s ratification at an event on 7 July to mark the third anniversary of the adoption of the landmark agreement by a large majority of the world’s nations. He said the treaty has particular resonance in the Pacific as a region that has suffered from decades of nuclear testing by colonial powers.

Honoured to deposit Fiji’s instrument of ratification for the Treaty on the Prohibition of Nuclear Weapons (TPNW) at UN on 3rd Anniversary of it’s adoption. Thank you #ICAN for hosting a commemorative event. Thank you to @fijiparliament, civil society for supporting this effort. pic.twitter.com/kAO4HGuQJI

Fijian activist and ICAN Pacific campaigner Dr Vanessa Griffen spoke at the online event to mark Fiji’s ratification, and published an opinion piece in the Guardian with Talei Luscia Mangioni “‘Will to fight together’: Fiji has taken another bold step in the battle against nuclear weapons.”

Botswana deposited its instrument of ratification with the UN Secretary-General, Mr. António Guterres, on 15 July, becoming the third member of the Southern African Development Community (SADC) to ratify the treaty this year, after Namibia and Lesotho. South Africa, which is also a SADC member, ratified it in 2019.

“In concluding this milestone step,” said Amb. Collen Vixen Kelapile, Botswana’s permanent representative to the United Nations, “Botswana has once again reconfirmed its unwavering commitment to global peace and security through prohibition of nuclear weapons as a concrete means towards full implementation of the disarmament agenda.”

Most recently, Sudan’s permanent representative to the United Nations, Amb. Omer Mohamed Ahmed Siddig, signed the treaty on behalf of his country following a decision by UN officials to begin easing restrictions related to COVID-19 at the UN headquarters in New York. Sudan will now initiate its domestic process to ratify the treaty and become a state party. 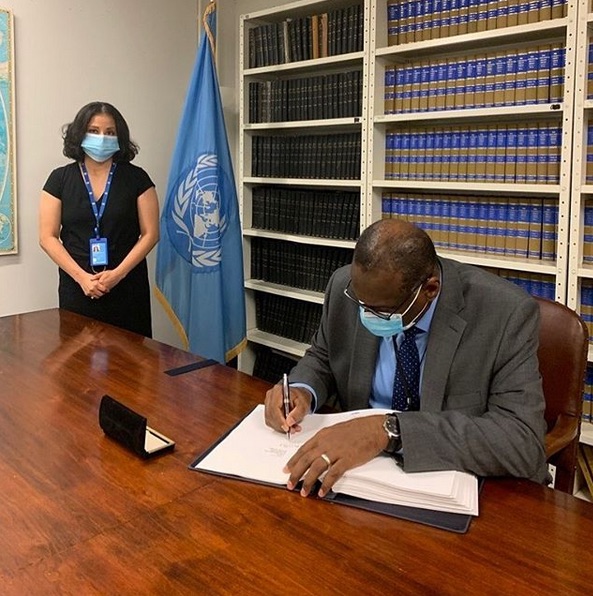 Last week, the African Commission on Nuclear Energy issued a statement calling upon all African states to support the entry into force of the nuclear weapon ban treaty. It said that the treaty “advances international law in nuclear disarmament and is consistent with the goals of the Treaty of Pelindaba” – a regional pact establishing Africa as a nuclear-weapon-free zone.

ICAN is calling for nations that have not yet done so to sign and ratify the treaty in early August to commemorate the 75th anniversaries of the nuclear bombings of Hiroshima and Nagasaki, and to honour their victims and survivors.