ICAN Australia today marks the 70th anniversary of the first of Britain’s nuclear weapons tests in Australia. This first test on 3 October, 1952 was conducted off the Monte Bello Islands, traditional lands of the Noala peoples.

Developed by the United Kingdom, the test declared Britain as the third country to acquire nuclear weapons capabilities. The test was code named “Operation Hurricane”, and involved the British Naval fleet. It was a plutonium implosion weapon, similar to the design of that used on Nagasaki in 1945. It would be the first of 12 nuclear atmospheric nuclear weapons tests to take place in Australia between 1952 and 1957, with additional development of nuclear weapons capabilities through “minor trials” up until 1963.

The 1985 Royal Commission into British Nuclear Testing in Australia found that fallout reached the mainland around 30 hours after the Hurricane blast, and spread across the northwest of Australia.

Between 1953 and 1957, further testing took place at Emu Field and Maralinga in South Australia without the consent of the local Anangu Peoples. Two further atomic tests took place again on Monte Bello islands in 1956. These tests saw fallout over much of the Australian mainland and further into the Pacific.

In her remarks at the United Nations in 2017, Kokatha elder and ICAN Ambassador Aunty Sue Coleman-Haseldine bore witness to the legacy of nuclear testing on First Nations communities. “Aboriginal people were still living close to the test sites and were told nothing about radiation” she told the negotiating conference for the Treaty on the Prohibition of Nuclear Weapons, “High rates of cancer and chronic illness haunt my family and our wider community.”

“Australia, as a state that has been subjected to nuclear weapons testing by foreign powers, is urged to sign and ratify the TPNW, and cooperate with other States Parties on addressing the historic and on-going harms of the nuclear weapons tests here” said Dimity Hawkins AM, ICAN co-founder.

Today is a deeply significant anniversary. We encourage you to take time to consider the victims and survivors of nuclear weapons in Australia, and the vast areas of country that were used as nuclear sacrifice zones. We hope the UN Treaty on the Prohibition of Nuclear Weapons will be a powerful tool to seek long overdue justice for communities still impacted by this devastating chapter of history.

A statement from people affected by nuclear testing in Australia was released in June 2022, which you can read below. 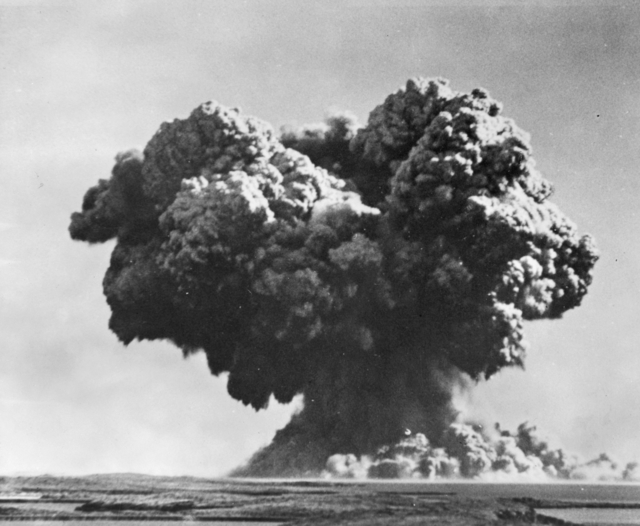