Sachertorte #4: Meeting of States Parties to the TPNW, Day 1

First Meeting of States Parties to the Treaty on the Prohibition of Nuclear Weapons, Day 1

Five years on from the conference that birthed the Treaty on the Prohibition of Nuclear Weapons (TPNW), its 65 states parties have converged on Vienna, to consider the implementation and status of this groundbreaking Treaty.

This historic day was an opportunity for parties and observers to engage with the challenges of realising the Treaty’s ambition, and reflect on the urgency and value of nuclear disarmament.

An Australian in Vienna

The meeting was formally opened by the Under Secretary-General of the United Nations, Izumi Nakamitsu. There was a high turnout from observer states (including some who host nuclear warheads), including Germany, Switzerland, Norway, Netherlands, Sweden, Belgium – and of course, Australia.

While Australia did not offer remarks in this session, the government’s representative Susan Templeman MP joined Jemila, Tim, and the rest of ICAN to formally witness and connect with the countless activists, survivors, and other stakeholders on the ground in Vienna.

Susan Templeman is one of 100 Federal Parliamentarians who have publicly backed Australia joining the TPNW. You can check out the rest here. 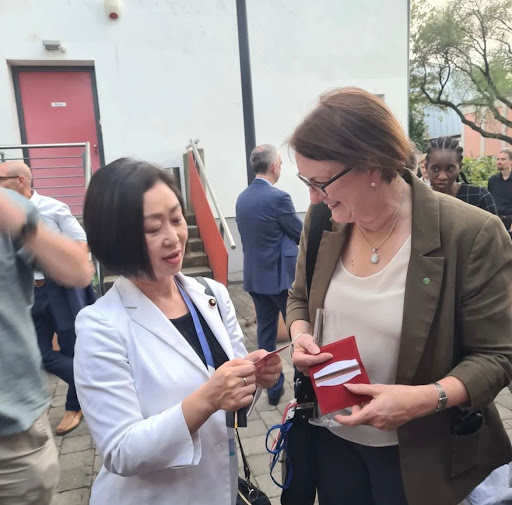 The Meeting’s President was then formally elected, with Alexander Kmentt taking the chair. He emphasised the seriousness of the Treaty achieving universality, whatever the challenges, and his ongoing commitment to a world without nuclear weapons. He expressed particular appreciation for observer states, for engaging with the conference and contributing to its development. A loud cheer let out when Kmentt thanked the three countries that had ratified the night before – Timor-Leste, Grenada, Cabo Verde. 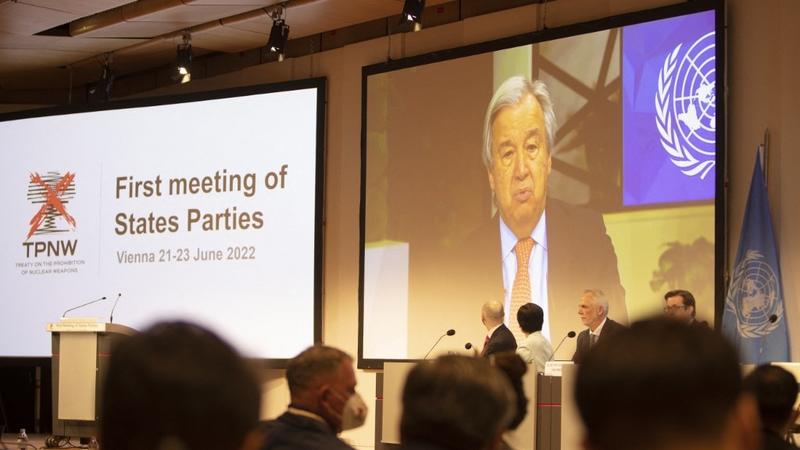 Secretary-General Antonio Guterres presented a recorded address, where he emphatically praised the Treaty and its proponents, while stressing its significance to global security. The President of the International Committee of the Red Cross, Peter Maruer, condemned any countenancing of ‘tactical’ nukes, or any other type of nuclear weapon, as existentially threatening. He reflected on the rapid progress of the past few years:

“A decade ago, this may have seemed illusory; today, a global, comprehensive, unequivocal prohibition of nuclear weapons – the most catastrophic weapons ever created – is a reality”

Our very own Executive Director of ICAN, Beatrice Fihn, was another key speaker. She recalled the earlier stages of the Treaty’s development, citing the seminal 2014 Vienna Conference on the Impact of Nuclear Weapons as a turning point in the dominance of discredited notions of ‘nuclear deterrence’. She was optimistic about the future of our project: “As we have worked to prohibit nuclear weapons, we must now work to eliminate them.”

Nuclear testing survivor and artist from Kazakhstan, Karipbek Kuyukov, shared his community’s harrowing experiences growing up near the Semipalatinsk nuclear testing facility, at which the USSR performed 456 separate nuclear tests before 1991. Karipbek would frequently be woken by the sound and power of the distant explosions, growing up. The resulting radiation exposure poisoned and continues to tear at the fabric of Karipbek’s community, where orphanages swell with injured children, while scrappers poison themselves trying to sell radioactive metal:

“Shepherds would brag about surviving a vast explosion…later they would taste iron in their mouths; their heads would ache; their teeth would fall, as well as their hair; they would lose their sight.”

Karipbek’s advocacy distills the profound injustices that nuclear weapons have produced, and continue to rely on. His story deepens the urgency for Australia and all nations to ratify the TPNW, and begin to assist peoples who have been ravaged by decades of reckless nuclear testing, under Articles 6 and 7 of the Treaty.

Frank Bainimarama, Fiji’s Prime Minister, reflected on how his father was exposed to radiation poisoning due to widespread nuclear testing throughout the Pacific in the 20th century; the Pacific alone endured more than 300 nuclear tests – equivalent to more than 14,000 Hiroshima or Nagasaki bombs. In endorsing the TPNW’s full scope and ambition, Bainimarama reminded us that the approximately $100 billion spent on nuclear weapons renewal each year is also the amount promised by richer countries to support climate-affected regions like the Pacific:

“It is not idealism that convinced us; it is level-headed common sense that calls on us to eliminate this means of species extinction.”

The Deputy Prime Minister of Kazakhstan, Mukhtar Tleuberdi, sought to establish common ground on complete nuclear disarmament. He emphasised the positive relations that had seen states parties bring the Treaty into force so quickly, and welcomed the enforcement of a contemporary timeline, to eliminate nuclear weapons irreversibly and internationally.

Alexander Schallenberg, Austria’s Foreign Affairs Minister, argued that “nuclear risks have not been this high for decades,” and debunks the suggestion that the war in Ukraine might have been avoided but for the assistance of nuclear weapons.He discussed how such manipulations are essentially a call for further nuclearisation, the suspension of “nothing less than a nuclear Sword of Samocles, hanging over all humanity.”

As speakers progressed, themes began to stitch themselves into the fabric of proceedings. Cuban Foreign Minister Bruno Parilla emphasised the persistent modernisation of warhead stocks as a profound threat to world peace, as did Minister Alvin Botes from South Africa:

Our neighbors in Aeteroea/New Zealand made a clear and direct appeal through their dedicated Minister for Disarmament and Arms Control, Phil Twyford, who cited Russia’s “illegal and unjustified invasion of Ukraine” as having “brought us to the brink of a nuclear catastrophe.” Twyford addressed key priorities to resolve over the course of conference, namely implementing the Treaty’s verification regime, establishing a disarmament timeline, and implementing the provisions to assist with international articles 6 or 7.

Pope Francis, represented by Archbishop Gabreile Caccis, reiterated the impassioned plea he first made in 2017:

“Trying to defend and ensure stability and peace, through a false sense of security, and a balance of terror, sustained by a balance of fear and mistrust, inevitably ends up poisoning relationships between peoples, and obstructing any possible form of dialogue.”

It was humbling to be joined by Mayors for Peace, and experience the wisdom of Nagasaki and Hiroshima Mayors Tomihisa Taue and Kazumi Matsui. Mayor Taue reiterated the good will and patience that is required to see lasting change, and made clear yesterday that it is our responsibility to “make Nagasaki the last atomic bombing site.” 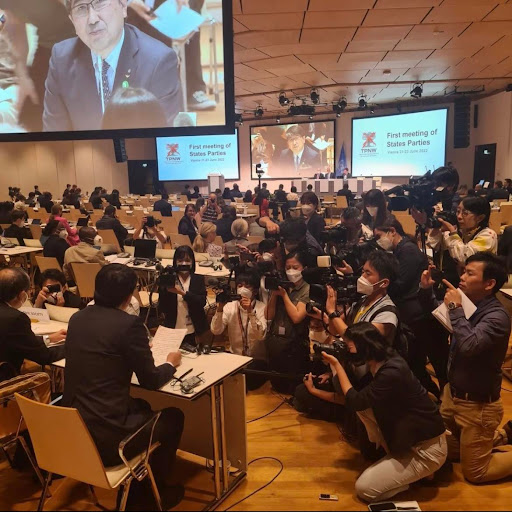 After the headline speeches had been made, all states parties had a chance to articulate their priorities and perspective to the conference floor:

Thailand offered gestures towards the “pragmatic” implications of verification concerns and international cooperation outside the Treaty.

Ireland noted the value of the Treaty’s inclusiveness, and the importance of centering women and girls in the treatment of radiation poisoning and related community hazards.

Malaysia made clear they “fully intend the TPNW to make practical and concrete contributions to global security.”

Ecuador supported strengthening NPT architecture through the Treaty and other means; congratulated Kazakhstan and Mexico for hosting the next MSPs.

Guyana noted that, to achieve objects of TPNW, particularly universality, will require vast cooperation between states.

Kirribati recounted the dozens of tests their community has been forced to live with the consequences of. They proposed making use of provisions in Articles 6 and 7 to establish an international fund for affected states, as well as a centralised science unit to share research. They situated today’s struggle for global peace and security in a historical context:

El Salvador noted that, since Grenada’s deposit of the Treaty on June 20, all Central American nations have now ratified the TPNW.

Indonesia wrapped the day by reiterating the distinction between civil and military uses of nuclear, and otherwise agreeing wholeheartedly with the Treaty.

So substantial is the participation of states parties and observers at MSP, the day concluded with 17 nations still left to present! They will be given a chance tomorrow to speak, before the conference’s attention turns to the detail of the Treaty, and assessing how effectively its goals are being pursued.